The Dan Plan: From Zero to Golf Hero

Outside of a few rounds of par-3 golf with the family, Dan McLaughlin had never touched a golf club prior to his 30th birthday but according to best-selling author Malcolm Gladwell, becoming “great” takes nothing more than 10,000 hours of practice in any chosen field.

McLaughlin took this advice to heart and quit his job as a commercial photographer to put Gladwell’s “Outlier” theory to the test. 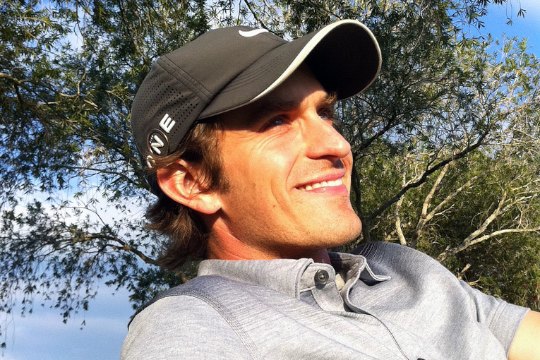 The plan, officially dubbed “The Dan Plan”, is to practice golf six hours a day, six days a week for six years. An erroneous task by any measure but even more so when he was starting from scratch – literally.

Exactly one year later and the 31-year-old has clocked up 1400 hours of practice and despite the expected roller-coaster of emotions along the way, McLaughlin is comfortable that he will complete his journey to the PGA Tour.

“The transition from gainfully employed photographer to declining bank accounted golfer-in-training was easy at first, hard at times and then comfortably understood as who I now am.”

“Initially, everything was new and exciting and I thought that I would quickly run up the skill ladder and be playing golf after about 6-12 months, but as I progressed (slower than I had imagined) I realised the difficulty of the task ahead of me.”

“I got overwhelmed on a few occasions and in all honesty was not sure how I would be able to financially and mentally continue for the entirety of the project, but I never lost sight of my goal and eventually gained enough momentum that it became second nature to go out and train every day.”

The Story So Far

We’d all like to play golf every day of the week but there’s always the small issue of money to worry about. McLaughlin says he has that under control….for the time being.

“Financially, there are still questions about whether I will be able to afford to continue for the next five years, but that is not something that I am worried about because there is enough savings to last for the time being and those issues can be addressed in the future if need be.”

Any golfer, even those of us who have been playing for many years, knows how hard the game is and McLaughlin has found that out the hard way.

“I had a lot of hopes for where I would be by this point.”

“To say the least, I had imagined that I would be playing golf, from the tees, with all the clubs, fully entrenched in fine tuning my game and well on my way towards entering regional competitions. But, Christopher (his PGA instructor) had something else to say about that and I thank him for it.”

“I think I made some great progress over the past 12 months and feel like with that foundation and the next 5 years of work ahead of me, there is no real reason why one could not make it.”

So what does the future hold for Dan?

“I’m still now, more than ever, convinced that if you put your mind to it and work hard you can achieve anything. Time will tell the truth, but for now I will enter the next year with more enthusiasm and determination than I dreamed I could have back on April 15, 2010.”

Keep up with Dan’s progress at www.thedanplan.com

Best of luck – we’re all green with envy!