Peter and Angela Mann are never backward in coming forward when the talk turns to amateur tournaments and where their Master of the Amateurs tournament stands.

The couple have built on a dream that started more than fifteen years ago and currently run the most successful and profitable amateur tournament in Australia. 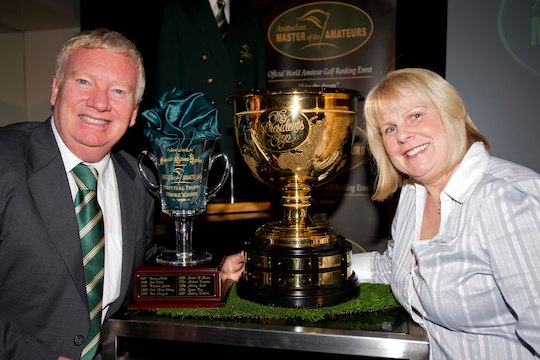 Those fortunate enough to either play or be part of the Master of the Amateurs have experienced first hand the passion and dedication the Mann’s have towards their event.

No detail is left out, every contingency is planned for over the twelve months of preparation the Mann’s put into the tournament’s week.

The aim is allow the players to experience the feeling of playing in a world class Tour event and feel the excitement of being a part of something special.

There is nothing like it in Australia and the week of the Master of the Amateurs, scheduled in the second week each January at the majestic Royal Melbourne Golf Club, rivals any major golf tournament in the world.

Boasting a tournament ranking amongst the best in the world, recognised as an official R&A ranking event and sitting as Australia’s top ranked amateur tournament, the Master of the Amateurs enjoys a unique position.

“We want players from around the world to live the dream,” says Tournament Director Peter Mann.

Ask PGA Tour player and former world number one amateur Rickie Fowler and he is quick to make reference to his experience playing the event as being one of the best he has competed in.

This year US Amateur champion Kelly Kraft and US Public Links champion Corbin Mills were blown away with the event, which according to Kraft was one of the best he has ever played.

The Mann’s are quite rightly proud of their achievement, which has been built upon a foundation of passion, daring and corporate support.

“We have had, and continue to have, wonderful support from our sponsors and over the years that’s developed a strong family of supporters,” says Peter Mann.

“This is our 16th year running and the tournament continues to go from strength to strength. Having the tournament at The Royal Melbourne Golf Club underpins the status of the event. We’ve got bigger plans for next year and it promises to be even better going back to Royal Melbourne for the third successive year.”

This forward thinking approach of continuous improvement and ongoing refining is what makes the Master of the Amateurs different to other main amateur tournaments in Australia.

The Mann’s don’t operate in the past as their event is a work in progress, even if their approach often goes against the golfing establishment in this country.

“When I first came up with the idea of running this event, there were plenty of doubters,” says Peter Mann.

“We put our head down saying that we would create the best amateur tournament in Australia and the world. Our event is now recognised and respected internationally, played at the number one golf course in Australia and we have a sponsors waiting list.”

The Master of the Amateurs has evolved into a prized tournament attracting international interest. The Mann’s have even been approached to move the event overseas but remain loyal to Australia.

“We have let our tournament do the talking and it’s attracted the best amateur field each year in Australia and sponsorship support which rivals the professional tournaments,” says Peter Mann.

“The base we have developed with the support of The Royal Melbourne Golf Club and its members, our sponsors, the championship committee, everyone is working in unison to make the Master of the Amateurs bigger and better.”

The focus for the future is the international stage and having the best amateurs from Asia, Europe and USA compete.

“As we attract more players from overseas, the Australian golfers will have to step up to get into the event,” says Mann.

“Over the years, we’ve attracted the likes of Tom Lewis, Victor Dubuisson, Rickie Fowler, Jason Day, Brendan Jones, Bud Cauley, Jordan Russell, Mark Anderson, all professionals that were some of the top world amateurs at the time,” says Mann.

The Mann’s know that building relationships leads to success. They have done the hard yards talking and travelling the world to put their event on the golfing map.

“Over the years both Angela and I have built wonder rapports with industry and sporting leaders,” says Mann.

“Many within the Australian golfing establishment have a narrow minded approach to running tournaments. They get too caught up in their own focus and don’t look outside the square to grow the game of golf. We have gone outside the traditional boundaries to create something unique.”

The tournament is run without the politics normally associated with amateur golf impeding the tournament. This freedom has clearly enabled the Master of Amateurs to grow.

“We run our own race within the guidelines of the R&A,” says Angela Mann.

“We respect the international guidelines of running amateur tournaments, but not having to report to a Board or a golfing association enables us to free up our time to grow our event.”

The Mann’s have successfully put their unique stamp on the promotion and running of a golfing event, often going against the grain of Australian amateur officialdom in their pursuit, yet the list of previous champions and where the tournament stands is testament to their resolve and self belief.

“We are still climbing the mountain and the journey continues to drive us. We look forward to reaching the top of the mountain, and we will ensure that we run the best amateur event in this country that places amateur golf on the world stage.”