Little did anybody know in October 2000 that the Titleist Pro V1 golf ball would become one of, if not, the most revolutionary products in golf equipment history.

Fifteen years ago, at the Invensys Classic at Las Vegas (now the Shriners Hospitals for Children Open), 47 players switched to the new multi-component, solid technology Pro V1 the first week it was available. 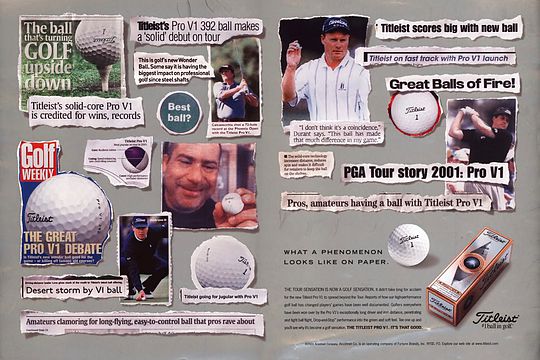 Las Vegas was the first event in which Tour players could play Pro V1 in competition after it was added to the Fall 2000 Edition of the USGA Conforming Golf Ball List.

Today, Pro V1 and Pro V1x are the most played and best-selling golf ball models around the world. Two out of every three players across the worldwide professional tours tee up a Pro V1 or Pro V1x, and the percentages are even higher at major men’s and women’s global amateur events, the NCAA Championships and competitive boys’ and girls’ junior championships.

“The Pro V1 responded to the changing nature of the game,” said Mary Lou Bohn, Vice President, Golf Ball Marketing and Titleist Communications “The arrival of the power game on the tour necessitated golf balls that delivered very low spin in the long game, while maintaining the spin, feel and control of the premium liquid centre, wound technology golf balls.”

To put things into perspective, Titleist Brand Ambassador Jordan Spieth, recently named PGA TOUR Player of the Year, was seven years old when the Pro V1 debuted in 2000 and is among several young Titleist golf ball loyalists who have never played anything but Pro V1 or Pro V1x in competition.

“I’ve been playing the Pro V1 or Pro V1x since I was 12 years old and started playing competitively,” said Spieth. “That is when I made golf my number one sport and wanted to shoot the lowest scores possible. I haven’t played another ball in competition since then. I think everybody that took the game seriously, at least my peers at the time, all wanted to play the Pro V1 or Pro V1x.”

“We didn’t know what to call it,” said Morgan. “The leading tour-played ball at the time was the Titleist Professional. We were coming up to the USGA deadline for getting balls on the conforming list, so I just put an interim stamp on for submission and I figured we would work out what to officially call it later.”

“I wrote Pro for Professional, V for the ‘Veneer Project’ that it was called in R&D, and the number 1. I absolutely thought we would change the name but the players said they loved it – so it stuck.”