I guess it was inevitable…it had to happen.

Now we have drones, yes drones, serving you drinks and food on the golf course, meaning you don’t even need to take a break between holes.

It’s a golf club in the US [naturally] that is blazing the trail – and it’s a North Dakota golf course that now has a drone delivering burgers and refreshments to customers.

The club suggests this new method of delivery is cheaper than a food cart with the refreshments reaching customers in just 10 minutes.

At this stage it appears to be in the experimental stage – although it does seem to be the way of the future.

Golfers are able to use an app on their phones to order food and drinks for a $3 delivery charge at the King’s Walk golf course with the six-week trial beginning this week.

The delivery drone weighs around 15 kilos, flies about 48kph and hovers about 76 metres above the golfers to avoid any balls knocking it out of the sky. 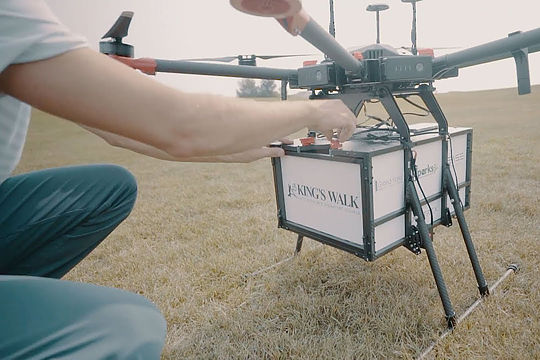 According to the King’s Walk course’s executive director Bill Palmiscno the younger golfers are keener to use the drone than anyone.

According to CNN, the company providing the drones is FlyTrex, an Israeli start-up which has already found success in the food delivery business in Iceland this year.

For the drones to be a permanent fixture at the golf course, they’d need an FAA permit.

In the United States, drone delivery has been fairly rare due to strict regulations although according to the drones manufacturer, the open spaces provided by a golf course make for an ideal test market.