No-one has had a hand in the design of as many golf courses in this country as Al Howard, who passed away last week at the ripe old age of 100.

Born on May 8, 1913, Al was previously the oldest living PGA Professional in Australia and had an Order of Australia Medal for his services to golf. 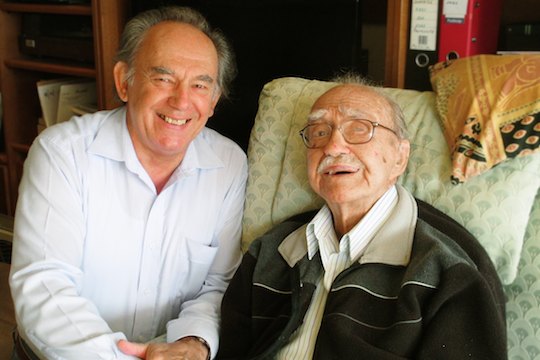 Al Howard (R) with his eldest son, Ross Howard (L), who has also been a course designer (Credit: Michael Court)

Al tried just about everything in the game – and mastered it as well, during his 100 years.

He was the professional at Woollahra from 1946-48, at Cromer from 1948-51 and later served at Monash as well as Rosnay Golf Clubs.

Despite his ailing health in recent months, Al’s mind was as sharp as ever and even in the weeks leading up to his death was suggesting changes to Cromer he felt would improve the layout of the northern beaches Sydney course.

Al was widely regarded as the best Australian-born golf course architect and one of his most highly-acclaimed ventures was the marvelous Tasmanian Golf Club layout at Barilla Bay in Hobart.

Many golfers rated Tasmania’s 550m third hole one of Australia’s most spectacular holes – a comment echoed by none other than the great Jack Nicklaus.

He was an active and dedicated PGA member, giving much of his time to the development of the association and golf in the country.

Amazingly, he was also the golf commentator for the old Truth newspaper in Sydney for something like 37 years.

And to top all that off, he once held the course record of 63 at Cammeray.

A son of former Australian Open winner Tom Howard, Al was a gentleman…and a gentle man. His humour and wit will be missed by all who knew him.

And as a personal friend of mine, if ever I needed a hand with my putting stroke, he was quick to straighten me out there as well.

While Al outlived most of his contemporaries, golf professionals and golfers came from far and wide to pay their respects to the great man at a funeral service at a site Al would have loved – Long Reef Golf Club, overlooking the Pacific Ocean.