An unknown number of persons gained access to the course and drove across three of the course’s greens. 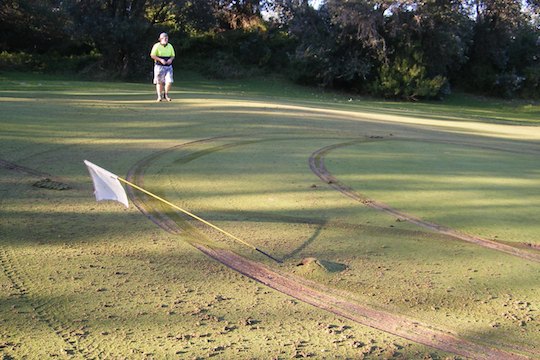 “One (the 7th green) they really, really stuffed up and we’re going to have to replace the whole thing,” said Lakes Entrance Golf Club President Peter Surgenor.

Surgenor estimated repairs to the 7th green alone could cost up to $50,000.

“It was the 7th which is our number one hole – one of the nicest holes in Gippsland I reckon – and then the 14th and 15th. The 14th is a big, long par-five that goes up the hill and the damage to that we hope is just repairable,” he said.

At the time of writing, slow grass growing was delaying the recovery of the greens, especially the 7th.

The 14th and 15th greens were back in play before the beginning of August but car track marks were still hampering surface quality.

“It’s the slow growing season now so you can repair it but you’ve just got to wait until the grass starts growing,” said Surgenor.

“We’ve got to wait for the weather to improve. That’s going to take a couple of months. Hopefully they’ll be ready by this summer.”

Police investigations were continuing at the time of writing.

Insurance covered the vast majority of the damage but the club was expecting ongoing economic damage.

“We’ve got excesses to pay which is about $2500 I think and then (insurance companies) put up your premiums. Then you’ve got to try and think ‘is there any more security we can put around the bloody place?’ The insurance doesn’t cover (security upgrades), you know, all these out of pocket expenses.”

The poor condition of the targeted greens has affected the number of players on course.

“Of course the course for the members becomes less attractive to play,” said Surgenor.

“We’re not playing on the worst green at the moment, we’ve got a temporary green in and green fee players come and you can’t be charging them full dollar so you’ve got all these small losses of interest and playability as well.”

It’s not the first time that a car has been used to vandalise Lakes Entrance with a vehicle driving up and down one of the course’s fairways last year.

Surgenor said it’s been a particularly testing period for the club, which had to close the course for two days in mid-July due to flooding.

“We had some high south-west winds and high tides,” he said.

“We’re down low near the tidal level and so when there’s rain on top of it the water doesn’t get away anywhere so we had to shut the course. We hardly ever shut the course. The last time was the 2007 floods. It’s been a testing period, very frustrating.

“We’re struggling to deal with the things that are within our control.”