The proposed national “Home of Golf” project, which would see the head offices of PGA of Australia, Golf Australia and Golf Victoria under one roof, has received a boost with Victorian Opposition Leader Daniel Andrews assuring his support for the project under a Labor Government.

The National Home of Golf and Centre of Excellence Project is a “world first” development that, for the first time in golf’s history, will bring together the Australian golf industry. 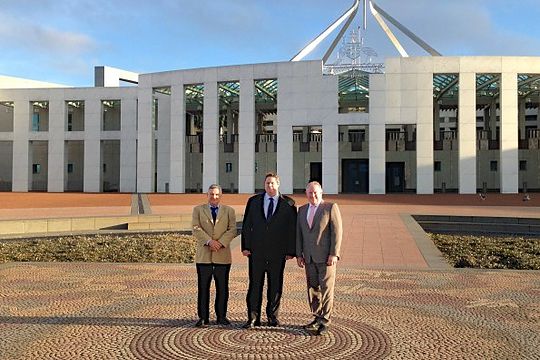 This project will help grow the game and ensure it has a long term sustainable future through development of world standard educational, training, research and administration facilities developed in partnership with all levels of government.

The proposed development would also include a Museum and Hall of Fame, another first for the sport within Australia. It is estimated that $32million in funding is required for the project.

Speaking last week from Metropolitan Golf Club, the venue of the Australian Masters, Andrews pledged funding towards the project.

“If the Labor Government is elected on the 29th November, we will allocate $10 million towards this exciting proposal, the Home of Golf,” said Andrews.

“Having all the different bodies under one roof [and] giving them the best facilities, that’s how we will create the best players and the best prospects for the future.”

The announcement earlier this year by the CEO’s of all three organisations of the intended project demonstrates a positive direction for the golf industry, which has traditionally been fragmented in its governance.

“Golf as a business contributes billions to the economy, and it is our duty to ensure we implement strategies for this to grow well into the future.” said Brian Thorburn, PGA of Australia Chief Executive Officer.

All parties acknowledge the Labor Party’s commitment to golf and with the sport returning to the Olympics in 2016, Golf Australia Chief Executive Officer Stephen Pitt said it was an opportune time to plan for a bold future.

The benefit of the proposed facility has the potential to extend across a diverse section of the community.

The golf driving range and short course practice area will be utilised for new programs and activities that are designed to encourage inclusion across all sectors of the Australian community including socially and economically disadvantaged, women, Indigenous Australians and the multicultural sector.