It once boasted the fourth-largest membership in NSW.

But this week members at Wentworth Golf Club at Orange were left in shock after their clubhouse burned to the ground last weekend. 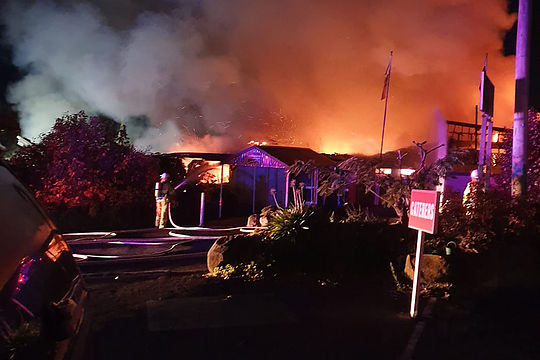 Crews rushed from Orange as well as Kelso and Bathurst in an attempt to douse a massive fire that was believed to have been caused by an electrical fault at 1.40am on Saturday morning.

While the pro shop was the only thing left standing, it appears there were no suspicious circumstances.

And like so many clubs that are hit by fires, honour boards and trophies were among the biggest losses.

It’s been a tough road for Wentworth in recent years: first there was an armed robbery in 2013, followed by months of heavy rain in 2016, then a drought has affected the club and there was also an attempted robbery of the club’s ATM last year.

Club president Simon Atkinson, who was on the scene quickly after hearing news the club was on fire, said there was a concrete floor up one end and at one stage he thought firefighters might be able to control it, but once it got into the roof structure, it went from one end to the other.

Atkinson said the rest of the floor was timber and the gaming machines simply fell through – while the building was insured, he said 50 years of work from members went up in smoke.

“We were getting on track and we turned a profit last year – when something like this happens, it puts us right back,” Mr Atkinson said.

“Our biggest concern is getting golfers back on the course,” he said.