We’re deep in the throws of winter. The chill has set in. Rain has been pelting the Eastern seaboard, and winds have played havoc on course.

Conditions were so bad last month that many NSW clubs were forced to cancel play for several days. 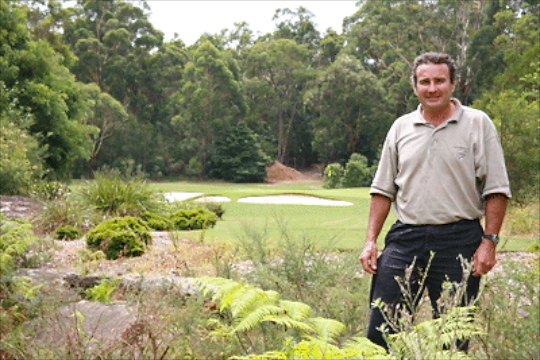 It was a tough end to a confronting financial year that saw several golf clubs struggling to survive.

All of which only adds to those winter golfing blues.

And we all know, when golfers get the blues, someone usually ends up with a mouthful of their discontent.

Now be honest – who can claim not to have had a moan about course conditions when the growing season stops, the winter grass takes hold, the drainage isn’t effective and bare patches are causing your ball to spew off in a direction other than where you intended?

Many of you will naturally have sussed out the real problems. They’re mowing the grass too short, the irrigation has been put in the wrong place, or the wrong turf has been planted in the first place.

You may have offered to share your unrecognised expertise with committee members or the club manager, always in demand when the course isn’t playing well, but the people you’re really gunning for at this time of the year are the green keepers.

No wonder they all took off to Adelaide in June for the 27th Annual Turfgrass Conference, where discussions about microclimates and disease were a lot more jolly than an ambush by a grumpy club golfer.

Among those participating was 2010 Golf Course Superintendent of the Year, David Warwick, who was there to talk about his approach to course management. He was philosophical when we confronted him on how the greens staff deal with club members’ winter blues.

“You just have to try to explain that we are at the mercy of Mother Nature, and that things will improve,” said Warwick.

“But the reality is, the lower arch of the sun, less light, less growth, winter disease, wet soils, slow recovery and winter grass invasion are all major issues at this time of the year.”

How a course superintendent deals with dormant May-to-September grass season varies from club to club and is completely dependent on the club’s commitment and financial ability to fight off Mother Nature’s attackers.

“A lot of clubs are under pressure. They want good playing surfaces but they also want the course open 365 days of the year. They need the income but there is a heavy traffic cost,” said Warwick.

Poor weather conditions can also leave courses vulnerable to disease outbreak and Warwick said vigilance is required to keep these diseases under control.

“In winter, disease can affect broad acre areas as well as the greens, but a lot of clubs simply can’t afford to spray fungicide on the fairways. That’s why a year-round strategy is important,” he said.

Warwick told the Adelaide conference that like many clubs, his home turf,

Avondale, faced microclimate issues of shade and lack of air movement that compounded in winter.

“Microclimate management on any turf is one of the greatest challenges we face in consistent surface preparation. The double edged sward for us is that our microclimate greens are all on the southern side of tall dense eucalyptus forest creating huge shade problems for five months of the year and directly impacting on root system development. By summer, the microclimate greens have significantly less root system to deal with the stresses of the hot weather.”

Warwick employs a system of frequent light fertilizing, hand mowing, hand weeding, frequent change of hole position, and no irrigation during winter to manage the issue, as well as deploying sophisticated but energy-efficient commercial fans on the most troubled greens.

As a course superintendent he says he is lucky to be employed by a club that sees the value of long term course management and is committed to financing it, but he also recognises many clubs are stretched to provide the equipment, on-going study and staff to keep courses at their peak condition.

And at the end of the day, there’s only so much the green keepers can do. We are, after all, talking about a sport that is totally dependent on climate and environmental conditions.

So spare a thought for the boys down in the green keepers shed, especially in the winter months. They’re at the mercy of Mother Nature and constantly changing committees who are under increasing financial pressure.

And remember there is something you can do to help. This is the time of the year when it’s vital you repair your pitch marks and divots. It might help take your mind off the winter blues.