After one of the biggest sponsor dissociations in the history of sport, Tiger Woods is close to signing a new global endorsement.

Woods was easily the world’s highest-paid TV advertisement star with most corporate giants unable to raise the funds to get Woods to appear for them. 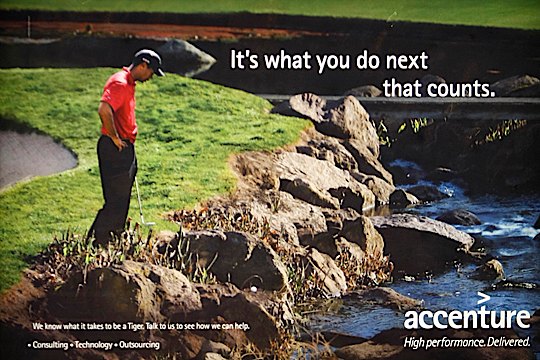 Then came last year’s sex scandal revelations with some of the biggest corporate names in business and sport – Accenture, AT & T, Gillette and Gatorade – severing ties with Woods.

Only Nike and Electronic Arts remained true to Woods.

But 12 months is a long time in any walk of life, and people do forgive, forget and move on.

That’s what Woods’ long-time IMG manager, Mark Steinberg is hoping occurs this year, revealing he’s close to signing a number of new deals for the former World No. 1.

Steinberg is senior vice-president and global managing director with the sports management giant.

He first responded to a question from CNBC if he would have handled Woods’ sex addition revelations any differently.

“There was no playbook to the situation that was in front of us,” he said.

“Regardless of how everything was handled, there would be questions.

“What gets lost is that there was a family dynamic involved and dealing with that was paramount to everything.

“We are now 12 months removed and the focus must be on the future.

“Tiger is committed and optimistic about his family and his future.”

And Steinberg answered a sharp ‘absolutely not’ when asked if he ever considered parting company with Woods.

And even though Woods has now lost his No. 1 tag, companies cannot be expected to get Woods signature at a discounted price.

“We’re close to a deal coming out of Asia and we’re in discussions with a number of companies interested in being on Tiger’s golf bag,” said Steinberg to CNBC.

“It will be a case-by-case basis.

“But we’re definitely being aggressive.

“I think people thought that I just answered the phones when company executives called.

“That was never the case as I’ve always been pro-active.

“The thing was I was just not going to pick a date and decide that that would be the time to go into the marketplace and seek new sponsors.

Steinberg, who refused to disclose how much Woods lost when sponsors foreclosed on their contracts, said he knew the time was right after conducting a study of the marketplace.

“We commissioned a study that involved polling a certain target demographic,” said Steinberg.

When Woods turned pro in late September, 1996 it was for a reputed $US 46m, and in just over a decade Woods became the first billion dollar earner in sport.

But while Woods’ name might still be ‘mud’ in the corporate world, Steinberg says he’s confident his star client would soon also have the backing of a global brand.

“I can’t say I was surprised,” said Steinberg when asked if he was prepared for the sponsors’ fallout.

“I obviously knew there would be some fallout.

“But we do have a great future.

“Soon he’ll have a bag deal with a new partner and within time I am confident there will be global brand that will be using his name and likeness.”

And Steinberg is also confident, with the public’s and the corporate world’s forgiveness, Woods can get back to be sport’s leading money-earner away from the golf course.

“I think we live in a society that is about second chances,” said Steinberg.

“And if he conducts the way he has been, continues his rehabilitation and performs on the golf course, I do believe he’ll be back to where he was before.”

Also there’s been no fallout in regards to Woods golf course design work.

“There’s been no change and it’s the same business,” Steinberg added.

“We were never going to do two or three courses as year.

“In the US it has been difficult. Asia looks more promising.

“The course in North Carolina is proceeding and we’re in discussion over the timeline of things in Dubai.”

And no doubt helping Woods win back fans is his decision to start using Twitter.

“Well, he’s not a technology geek, at all, but Twitter has taken the world by storm and it definitely piqued his interest,” said Steinberg.

“It’s a great way to connect with his fans enmasse.”