Two of the biggest names in golf, Tiger Woods and Rory McIlroy, have joined forces to create a new league aimed at bringing the PGA Tour into the burgeoning world of e-sports.

The US-based PGA Tour has been slow to dip its toes into the field of electronic sports, which has already proven to be a hit worldwide especially in Asian countries such as South Korea and China. 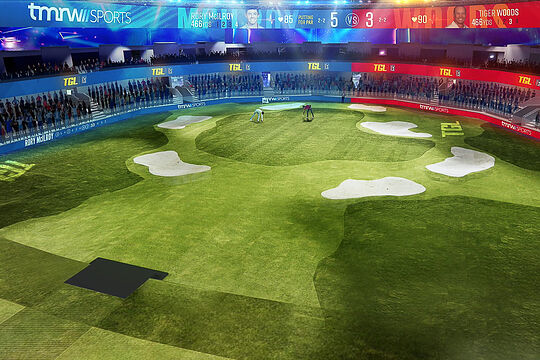 So it comes as no surprise, with LIV Golf nipping at the heels of the normally glacial PGA Tour, that the timing was right for the launch of this new concept in the US market.

Woods and McIlroy have partnered with former Golf Channel president Mike McCarley and the PGA Tour to form TMRW Sports [Tomorrow Sports], which will bring the idea to life from January 2024.

The joint venture’s first product will feature six teams of three PGA Tour players competing in made-for-television events that will combine virtual technology with traditional golf in two-hour, primetime televised matches. International viewing options have yet to be announced.

“I have the utmost respect for the game of golf, and the TGL, while rooted in the traditions of the game, is taking a bold step into the increasingly tech-fuelled future of sports,” said McIlroy. “TGL will tap into the appeal of team golf within an exciting, fan-friendly environment…[and] will widen the appeal of golf to younger and more diverse fans and serve as another avenue to introduce people to the game I love.”

“As a big sports fan myself, I’m excited about blending golf with technology and team elements common in other sports,” Woods added. “We all know what it’s like to be in a football stadium or a basketball arena where you can watch every play, every minute of action unfold right in front of you. It’s something that inherently isn’t possible in traditional golf — and an aspect of TGL that will set it apart and appeal to a new generation of fans.”

It’s an interesting move given the PGA Tour’s intense criticism of LIV Golf’s team-based format. In the past month, we have also seen the same tour float the idea of several limited team events as part of its last-minute attempt at arresting the loss of further high-profile PGA Tour players.

Hopefully the arrival of competition on the world golfing stage will bring further “thinking outside the square” moments and new opportunities to the golfing market.