With the 30th anniversary of the birth of the Official World Golf Ranking upon us, the European Tour looks back over some of the most interesting facts and figures from three decades in golf.

Launched the week of the 1986 Masters, Mark McCormack’s vision has seen rankings issued over a period of 1,565 weeks, with European Tour stalwart Bernhard Langer occupying top spot on the very first of those weeks and with it becoming golf’s original World Number One. 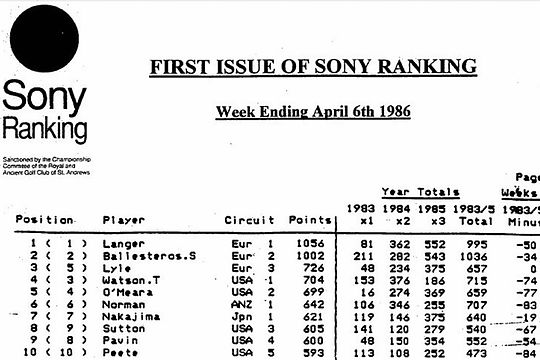 Indeed, this is how the top ten in the world looked that week back in 1986…

Overall, 19 players have had the privilege of being World Number One, from ten different countries.

Unsurprisingly, Tiger Woods has occupied the top spot for the longest period of time overall, at a gargantuan 683 total weeks spent ranked as the best player on the globe.

The 14-time Major winner also holds the record for spending the most consecutive time at the summit, thanks to the astonishing run of 281 weeks which the American put together between June 2005 and October 2010.

Lee Westwood, who leads The European Tour’s all-time money list, was the man who took Woods’ spot as Number One, with Martin Kaymer, Luke Donald and Rory McIlroy all getting a taste of the accolade over the following two-year period.

The coveted top spot has changed hands 68 times overall, with European Tour legends Seve Ballesteros, Sir Nick Faldo, Ian Woosnam and Ernie Els having also enjoyed their time at the top of the game, while Australia’s Greg Norman and Woods have both moved to the top of the rankings on 11 different occasions.

Woods also has the honour of being the youngest Number One, a feat he achieved at the tender age of 21 years and 24 weeks, while Vijay Singh holds the record for becoming the oldest at 41 years and 28 weeks.

Impressively, Phil Mickelson spent more than 20 consecutive years inside the top 25 between September 1995 and November of last year.

The current battle for World Number One is more fierce than ever and in 2015 the top spot changed hands eight times – more than in any other year of the World Ranking – with Jason Day, Jordan Spieth and McIlroy, the trio who currently occupy the top three places, all spending various amounts of time at the summit.