As far as tourist attractions go, it’s even better than par for the course and now the longest golf course in the world continues to bring tourists to the Australian Outback.

And as the ‘Nullarbor Links’ as it is fondly referred to, celebrates its 10th birthday, there is no sign of it slowing down, or even trimming its fairways, for that matter either.

That’s because your mower would probably run out of petrol on this 1365km course which stretches all the way from Ceduna in South Australia to Kalgoorlie-Boulder in Western Australia.

It seems thousands of people have now played the course, which was ‘concocted’ over a few bottles of wine between Alf Caputo and the manager of the Balladonia Roadhouse, Bob Bongiorno as they discussed way to make visitors hang around this remote region for longer so they could maybe spend a few more dollars.

“We now have receipts for about 17,000 that have actually paid to play by getting a scorecard, but we know and understand from feedback from the roadhouses that almost the same amount play but don’t pay,” Caputo told the ABC.

“The other side of it is there have been benefits in people playing the course from a safety point of view.” 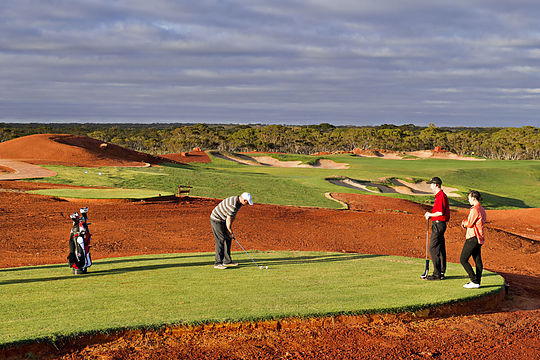 “There’s some compelling figures to say the accident rates have dropped significantly because fatigue doesn’t exist if you drive 100 kilometres, have to get out and hit a ball.”

There are synthetic tees and greens, which were installed a decade back at a cost of about $350,000 after receiving funding from the Federal Government.

And each year there is also the annual Chasing The Sun tournament played on the Nullarbor Links.

It drew a field of 71 this year which included tourists from as far afield as Germany, the US and even Canada.

And if you’re thinking there might be a hole with a par of 100, or something silly like that, you’re on the wrong track.

Each hole is about the same distance of your normal par four or five – it’s just that it’s a long way to the next tee.

But as anyone who has played it will tell you…it’s more about the experience.