Yani leaves her mark on Melbourne

Who was going to stop Yani Tseng in February?

The Taiwanese 22-year-old won the Handa Women’s Australian Open and lifted the Patricia Bridges Bowl for the second year in a row – showing just how much she enjoys Commonwealth Golf Club’s wonderful layout. 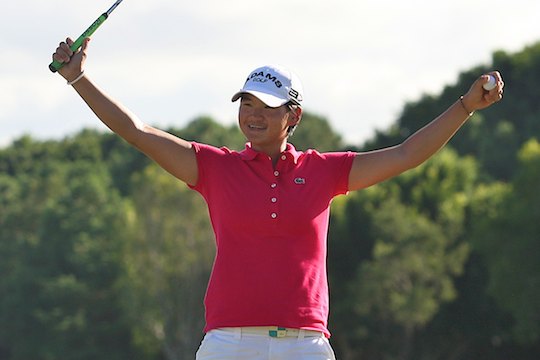 Yani joins Karrie Webb as the only two players to win the title in consecutive years. Of course she continued her red-hot form and won going away at the ANZ Ladies Masters the following week at Royal Pines.

We certainly look forward to welcoming Yani back in 2012 as she shoots for an unprecedented three consecutive Women’s Open titles.

It was a wonderful week in Melbourne highlighted by the attendance of then-World No.1 Jiyai Shin and the players who took part in the junior clinic which included drills from the MYGolf National Skills Challenge.

Led by Katherine Hull, American Tiffany Joh and Colombia’s Mariajo Uribe, the clinic was a great success and the girls had a fantastic time being taught by three LPGA Tour players.

It is a real thrill to see the juniors so excited by one-on-one tuition from Tour players and working hard to develop their skills. I know the players get enormous satisfaction in helping the next generation.

In January, I visited Queensland and met with club officials from some of the state’s worst affected courses following the devastating floods.

While the damage is clear to see and an enormous volume of work will be required to clean up the course, the spirit among Queensland residents will ensure that everything that can be done will be done.

It has been a testing time across the nation and Golf Australia will do whatever we can to support and advise and assist clubs not just in Queensland but in Victoria as well.

In February, we welcomed the R&A’s Director of Rules Grant Moir to Australia to jointly conduct our Advanced State Level Rules and Competitions course.

Grant’s visit forms part of Golf Australia’s national rules education framework which further increases the skill base and knowledge of rules officials around the country.

The course will also feature attendees and presenters from the PGA Tour of Australasia.

Grant is also heavily involved in the review and production of the 2012-2015 Rules of Golf and we look forward to providing golfers with information on any key changes later this year.

In mid-March, a senior USGA official visited Australia and took part in a number of sessions where a broad range of club officials engaged in discussion about the future make up of the Australian handicap system.

The sessions were used to collect feedback on general handicap system matters as well as the thoughts from club officials on challenges they face in their day-to-day administering of handicaps at club level.

These sessions are important to help us to fully implement the best possible handicap system for Australian golf.

March is another busy month, capped off with the Srixon Australian Amateur Championship which returns to Melbourne’s sandbelt for the first time in several years.