Junior Golf: When Did You Start?

It wasn’t all that long ago that most golf clubs would not allow junior members in until they were at least 16 years of age.

Many clubs now have a 12-years-of-age junior policy, while the more progressive clubs are starting children even younger than that. 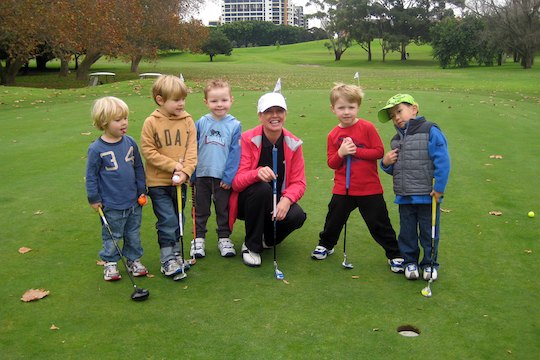 Junior Golf: When Did You Start?

There are now more and more youngsters developing an interest in the game through clinics and driving range programs.

But where do they join and play?

Take the Moore Park golf facility in the Sydney metropolitan area, for instance.

Here, with the enthusiasm and expertise of PGA member Gillian Rae, children as young as three, yes, three-years-of-age are being introduced to the game.

With sessions on the range, on the putting green and supervised on-course play, these young enthusiasts are showing plenty of skill and determination too.

Yet it takes a special skill to handle a group this young.

And the ever-patient Rae has just the traits to succeed.

Gillian, a native of Scotland and a member of the Australian PGA for 15 years, loves working with the kids.

She runs many junior clinics at Moore Park and has also become an expert in teaching female players.

“There are also other benefits, such as parents becoming involved in golf which is an under-utilised marketing tool for clubs.

“I am sure that many mothers would prefer to wait for their kids in the clubhouse with a hot chocolate rather than sit on the sideline of a cold, windy football field.

“In the summer parents that bring their children to clinics should be given access to play a few holes too or maybe the option to join in a separate clinic while their children participate in the junior clinics.

“You’ll find that many parents, once given the taste of golf, recognise the benefits of golf and the opportunity to learn and participate in a sport with their child.”

With modified equipment, parental supervision and professional expertise, this early introduction to the game will have widespread benefits in years to come.

Statistics suggest that 70 per cent of people, who were introduced to the game as youngsters, come back to the game in some capacity later on.

These youngsters could become the next club captain, a social green fee player or even just a four-time-a-year corporate golfer who contributes to the many charity days that are run by golf clubs.

Jack Newton Junior Golf CEO Peter Van Wegen encourages clubs to view their junior development initiatives, not as a means to increase their junior membership but as an opportunity to be involved in the development of the sport nationally:

“There are not many current club members who actually began their golf as juniors at the club where they are now members.

“If all clubs have a junior development program then these will be the players that take up membership later on, at many different clubs”.

Van Wegen explained that as a child developed some skill and a desire to play, it was often difficult to find a place for those youngsters to play.

That is where Jack Newton Junior Golf, one of the world’s best junior golf foundations, steps in with its unique playing programs.

The Juniors on the Move program is designed to give young people an opportunity to play the game with similar-aged youngsters.

The venues vary and are played on easier courses so the kids can learn to enjoy playing the game.

“With children ranging from seven to 13-years-of-age, nine-hole events are run each month with a parent/child day to complete the 12-month program,” he said.

“Our current program has 65 in the Newcastle Hunter area alone with 55 of those now regular players.

“And once the kids show a reasonable playing skill they are encouraged to join their local clubs.”

Another playing program gaining popularity is the Junior Jack events that are held about every four weeks and provide the developing player with the opportunity to compete with better-skilled youngsters and provide a taste of the type of events the kids can expect as they lower their handicap.

JNJG also supports the Golf Australia MyGolf program for clubs to get involved in a national skills program.

MyGolf provides the structure and resources to develop young people in the game of golf.

So what is the moral of the story?

Golf is an adult game on an adult facility with adult rules and regulations.

Clubs should continually reassess their junior development strategies to accommodate younger and younger players and introduce innovative programs that attract and engage young children and in doing so also encourages parents to take up the game.