Near perfect round for Peregian junior

After recently scoring an unbelievable 50 stableford points, Andrew Butterworth strode in to the Peregian Springs Golf Club convinced that he had finally won a major Saturday event.

But his second ‘celebratory’ beer tasted a little flatter than the first when the score of 13-year-old Michael McMahon was posted on the screen in the plush clubhouse. 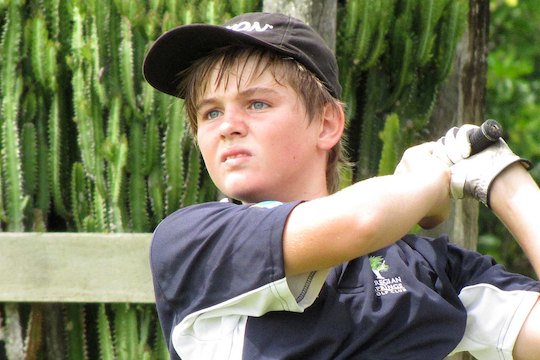 Playing off a 30 handicap, Michael had played the round of his young life to shoot 85 and score a near-perfect 53 points.

“I had 64 nett in the Monthly Medal six months ago and was beaten that day when a 61 came in,” said the well-known surfer with the nickname ‘Tunnel’.

But the vanquished was among a host at the club stunned that two miraculous scores had been returned on the same afternoon.

“I have heard of scores like that before – usually by blokes playing in corporate days off fictitious handicaps,” said Peregian Springs professional Wayne Rostron.

“We have actually had a 48 scored here this year, but never before have I heard of someone coming in with 50 points and being beaten. Andrew was absolutely shattered.”

With less than two years of competition golf behind him, Year 8 St Andrew’s College student Michael was justifiably proud of his brilliant score, but bitterly disappointed his handicap had not been reduced more.

“I only lost two strokes. I’m down to 28, but I thought it would be much lower after that round,” the youngster bemoaned.

But he has in fact had three shots sliced from his handicap in successive weekends. He was also a winner the previous Saturday, carding 99 for a nett 68 playing off 31.

In his magical round of 85 Michael had eight pars, seven bogeys and three doubles. He was proud of the fact he had no wipes, even though he did lose two balls.

“Michael is playing at Peregian Springs because of their wonderful junior golf program,” said his grateful mother.

“He was at another club but they just weren’t junior friendly at all. On weekends he was not allowed to play until after 3pm and it was soul destroying for him.”