12-year-old Shin a star in the making

While all eyes were on New Zealand 13-year-old wonderkid Lydia Ko at the Bing Lee/Samsung Women’s NSW Open last month, a few holes away, a 12-year-old Korean was quietly working her way around the course.

Shelly Shin was competing in her first professional tournament and while Ko was busy birdying hole after hole, Shin was left to rue three putt after three putt. 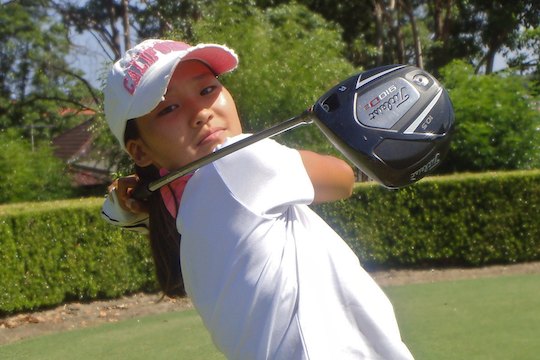 Shelley Shin: At just 12 she has the golf world at her feet

“I hit it okay but I had too many three putts,” was the Year 7 student’s blunt assessment of her game at the shortish Oatlands course in Sydney’s north west.

While Shin missed the cut after rounds of 80 and 78, Ko finished runner-up to Sweden’s Caroline Hedwall on 10-under 134.

The unusually tall Shin, who is already nudging 170cm, walked around the course to see what she could glean from watching Ko.

“She hits it straighter more than me,” was the only thing different that Shin could see.

“But she started playing when she was five and I started when I was only 10 so I can do okay.”

Shin lives in Sydney with her parents James and Jenny, having moved from Seoul in South Korea three years ago.

“Mum and Dad just thought this would be a better place for us to live,” she said.

Not that they came here for Shelly’s golfing future, which is what Ko’s parents did when they emigrated to New Zealand when their daughter was aged 7.

“We were living here in Sydney when Dad just suggested one day that I might try golf,” Shelly said.

“I tried it at Macquarie driving range and I really liked it.”

At the tender age of 10, Shin joined Sydney’s Muirfield golf course, playing off a handicap of 40.

“I won a lot of competitions there,” she laughed.

But then Shin became serious and in the short space of two and a half years, her handicap dropped to 2.

She now plays out of one of Sydney’s toughest courses, Concord Golf Club and is excited about the improvement in her game.

“The other day I shot one-under,” she smiled.

While this may sound impressive, ever the perfectionist, the youngster responded: “Yes but I had six birdies, so some holes I didn’t play really well.”

Shin is driven to improve her golf and practices for three hours after school each day and on weekends at least double that.

“I like practice, it’s better than studying,” she said.

Shin doesn’t know where her sporting ability comes from.

“Mum played basketball in Korea but Dad really didn’t play anything but he does like golf,” she said.

But somewhere along the way Shin inherited some serious sporting talent.

“I just love sport, it is better than doing homework,” she giggled.

Shin has no doubt about what she wants to do in the future but doesn’t think turning professional will happen too soon.

“I think Mum and Dad will want me to finish Year 12 in school,” she said.

But in the mean time, the shy 12-year-old has a handicap goal.

“I would like to be off plus something by the end of the year, I think that would be good,” she said.

“I just need to practice hitting the ball straighter.”

Yes Shelly, don’t we all!