Robert Allenby enjoys a unique distinction that not too many golfers can boast and that’s having been inside the top-50 on the world rankings for more than two decades in his career.

In turning 30 in 2001, Allenby was ranked 31st in the world, and then in reaching 40 on July 12, just ahead of this year’s British Open, the Victorian, amazingly, was still ranked 40 in the world. 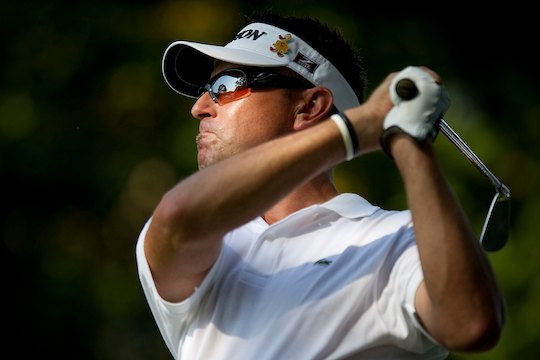 But it’s been also a decade since Allenby last won on the PGA Tour and he hasn’t tasted success since the back-to-back winning double at the end of 2009 when he captured the Nedbank Challenge and Australian PGA.

Yet Allenby has kept himself inside the world top-50 until recently, and qualified for each of the four majors for the past decade, with a remarkable 10 years of consistency on the PGA Tour.

In fact, Allenby’s done everything but taste a fifth PGA success.

He’s enjoyed seven second-place results, including finishing runner-up last year in the Players Championship, along with six third place finishes highlighted by third in the 2002 Canadian Open and the same finish in the 2007 WGC–CA Championship.

As well, Allenby’s had 41 other top-10 results in the US, and from those four wins and all his top-15 finishes on the PGA Tour, Allenby has earned a remarkable $US19,500,000 in prizemoney.

However, it’s the majors where Allenby still continues to succeed.

Amazingly, Allenby has contested all but one Major championship since 2001 – and that amounts to 43 starts on golf’s biggest stage.

But the tale of the tape is looking at Allenby’s results, and in contrast to his regular PGA finishes, he just hasn’t taken that form into the ‘big ones’.

“It’s the beauty of golf that you have to take what you’re given in this game,” he said.

“I’ve actually been playing pretty well all year and while it hasn’t happened, I don’t feel I am doing a lot wrong.

“It doesn’t matter whether you’re playing a regular tour event or a Major because there is a fine line between very good and not so good.

“When it all boils down there’s only four Major championships a year, and in some ways it’s good to get a decent break after the PGA Championship.”

However, when Allenby looked back on his performances in the majors this year, he wasn’t all that complimentary in writing his own report card.

“Not very good, just not good,” he said.

Allenby missed the halfway cut at both Augusta and Congressional while weekend rounds of 75-76 saw him finish 48th in the British Open behind similar 40-something champion Darren Clarke.

In the season’s final Major, the PGA Championship, Allenby headed into the final day inside the top-50 before finishing in a share of 26th place.

“At Augusta, I was talked out of an 8-iron and hit a 7-iron over the back at the last on Friday, and made a bogey to miss the cut by a shot,” he said.

“I had played really well that particular day.”

“I was playing okay again at the US Open but stuffed it up there, too. I really like Congressional but again there were some bad choices of club at the wrong times.”

“But then at Congressional everyone was playing for second behind Rory. He was always going to run away with it.”

“At Royal St George’s I played well the first two days, and aside from messing up with a double at 15 on that second day, and then taking bogey, that was a disappointing finish to any round.”

“So I was two-under heading to 15 and lying about fourth or fifth at the time.”

“Again I hit the wrong club off the tee, as I was going to hit 3-wood but was talked into a driver, and went into a bunker.”

“If you start to get greedy around a British Open, you come undone. “

“So in dropping those shots, I found myself not going off at around 2.30pm to like around 12 noon, and I played in just the worst conditions possible.”

“But then going into Sunday, I was still somewhat shattered from what I went through on Saturday.”