Those in the know who have watched Zach Murray’s steady rise from the junior ranks to elite amateur golf appreciate what an exciting prospect the Wodonga teenager is.

Murray’s made his transition on to the main amateur stage in 2015 when he won Australia’s top-ranked amateur tournament, the Australian Master of the Amateurs at Royal Melbourne, against a truely international field. 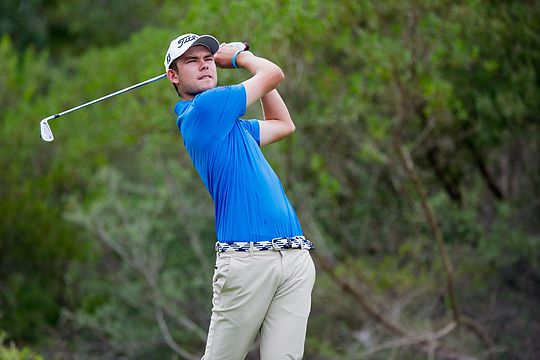 In professional events Murray, 19, has also held his own nicely making the cut this year at the Victorian Open. In match play he’s a stealth like player, as shown with big wins over the much touted Ryan Ruffels who is now attempting to play his way onto the PGA Tour.

Murray, like Ruffels, wants to make the journey to the big stage yet knows there’s more for him to learn before taking that jump.

“Last year I was a little under done. My preparation was not the best as I had injured my wrist. This year my preparation has been better. I’m training well with the VIS, working hard and mentally I feel confident that I’ll do well.”

Murray leaves for the UK on the 23rd May to prepare for his first tournament at the Scottish Stroke Play championship starting 27 May. His UK schedule includes the St Andrews Links Trophy starting 3 June and the British Amateur championship on 13 June.

“It’s a solid schedule and hopefully I can bag a number of top-10 results, even a win.”

Murray knows solid results in the UK against the stronger fields than what you have in Australia yields more world ranking points, enabling him to climb the ranking ladder to get inside the desired top-50 and elevate the need to pre-qualify for the US Amateur.

“I’m currently just outside the top-50, but well inside the top-100,” said Murray whose current ranking sits at 86th.

“That’s the plan, to get inside the top-50 and with some top finishes in Scotland that will set my US leg up nicely to move inside that number.”

Murray’s first US tournament is The Players Amateur starting 3 July. A week after that he’ll tee it up at The Southern Amateur before attending the Golf Australia training camp in Houston.

“Golf Australia have supported me in a fantastic way,” says Murray.

“Earlier in the year I was fortunate to represent my country at the Bonallack Trophy in Europe along with my great mate, Brett Coletta, and working with the National Squad guys has been a great assistance for me.”

The Golf Australia training camp is just before one of the most prestigious amateur events in the world, the Western Amateur. Names on the trophy include Jack Nicklaus, Tiger Woods, Justin Leonard and Phil Mickelson.

Jordan Spieth, Rickie Fowler all competed in this tournament and this is one Murray wants to do well in.

“That will be a great way to finish this tour, solid results in the US and hopefully I’ll play my way into the US Amateur. That’s the plan.”