Travis Smyth has announced his decision to move to the professional ranks with the world number 11 amateur closing out his amateur days following the completion of the Asia-Pacific Amateur on Sunday in New Zealand.

Smyth, winner of the Northern Territory PGA Championship, already has playing rights on the Australasian Tour which will see the 22-year-old competing in a full 2017-18 Australian summer schedule.

The St Michael’s club member, who is originally from Shellharbour in NSW, recorded a stellar amateur career which included being a 2017 US Amateur Championship quarter finalist, Australian Amateur quarter finalist, NSW Amateur Medallist and in 2016 finished runner-up at the Australian Amateur. He also won the Riversdale Cup, one of the most prestigious amateur titles in Australia.

Coached under the watchful eye of John Serhan, who was on Smyth’s bag in Wellington last week, Smyth’s progression over the last two years shows that hard work and commitment can deliver results. 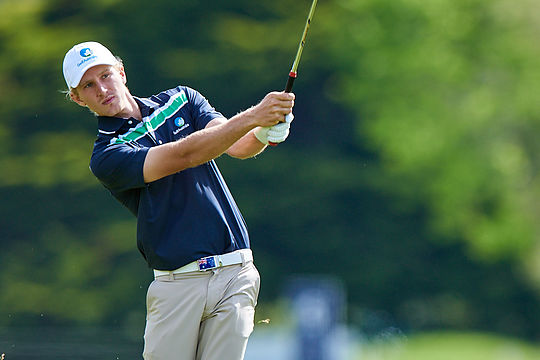 A product of Golf NSW High Performance system overseen by Dean Kinney, Smyth has evolved into the complete athlete with a discipline towards the profession that will serve him well when he first plays in the pro ranks at the NSW Open Championship starting 16 November at Twin Creeks Golf & Country Club.

Thereafter Smyth will focus on a North American pathway, exploring options on either the Canadian or Latin American Tours with the objective of making his way onto the Web.Com Tour.