Two of our most promising amateurs, David Micheluzzi and Blake Windred, have elected to turn professional making the announcement following the weekend’s Asia-Pacific Amateur Championship in China, marking the end of a chapter and the start of a new stage in their careers.

Victorian Micheluzzi will make his professional debut on the PGA Tour of Australasia at the Western Australian PGA Championship scheduled from 10-13th October after completing his amateur career ranked as the fourth best in the world. 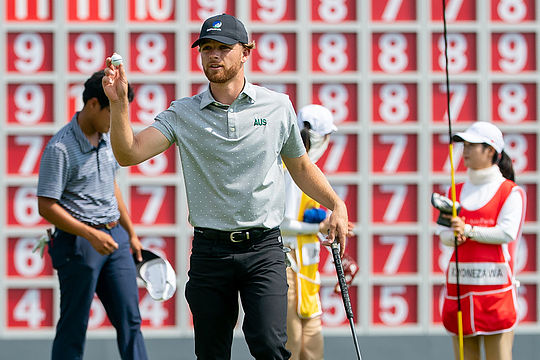 Micheluzzi’s amateur victories included the Victorian Amateur and Master of the Amateurs, Australia’s highest R&A ranked amateur tournament, a runner-up finish in the Australian Amateur and strong performances at the British Amateur.

“I’m pleased to make the announcement and to test my game now in the professional ranks,” said Micheluzzi.

“I’ve got some starts in Australia and from there I’ll be going on to Q-School in Europe and then hopefully get my card and play overseas.”

“My highlight to date is finishing fifth at the Australian Open and reaching the semi-finals at the British Am,” said Micheluzzi.

Windred’s professional debut will come at European Tour Q-School next month after finishing 13th at the Asia-Pacific Amateur despite a historic 63 in Thursday’s opening round. For Windred, it was a work in progress and the Novocastrian is eager to move to the paid ranks.

“This is what I want to do for a career so I’ve got to suck up the bad times because I was riding the wave early in the week and really making the most of the good times,” said Windred.

Windred’s accomplished amateur career included back-to-back victories at The Avondale Amateur as well as a string of top-20 results around the world to see him turn professional as the 10th best ranked amateur in the world.