And now we cross to Craig Perks

Without wanting to offend the many discerning female readers of this politically correct publication, there is at least one character trait shared by television sports commentators and women in general, particularly those who have been fortunate enough to land themselves a husband.

After all, both have been known to talk far too much – a hyperactive, attention seeking personality flaw which naturally breeds extreme cases of glue ear for those poor, brow beaten partners craving just a smidgeon of peace and quiet. 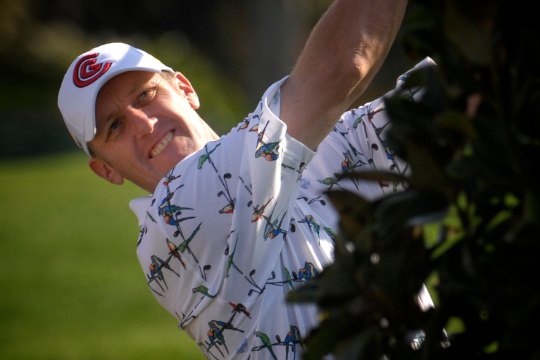 Of course, we sufferers always have the fall back option of hitting the mute button or making the supreme physical sacrifice of standing up and walking out of the room.

The latter option is a last resort, mind you, because it requires severing the umbilical cord between the man of the house and his links with the outside world – the television.

Say what you want about the tube, but it most certainly is a cheap, convenient and almost indispensable appliance when the golfer of the family home wants to while away the hours following the action on the PGA Tour in the United States.

As in most spheres of life, the quality of broadcasters bringing the game to a worldwide audience varies greatly and it is one of life’s mysteries why two of the better practitioners of an admittedly difficult art call New Zealand home.

Frank Nobilo and Craig Perks are two of the best analysts around after discovering second careers in a devilishly difficult game which once spurned them, Nobilo because of a crippling back injury and Perks because swing changes designed to improve his productivity had the exact opposite result.

The bearded Nobilo is the better known of the pair, having worked for the Golf Channel since 2003 and having recently extended his network contract through to 2014.

Perks was first introduced to our screens as an analyst and commentator in 2008 and he now finds himself on the road for 20 weeks of the year, providing well researched and cleverly articulated views for international audiences on the second tier Nationwide Tour plus seven to eight PGA Tour events.

The 44-year-old husband of one and father of two leads a busy life, sandwiching his television role with his bread and butter job as the director of golf at Le Triomphe Country Club in Broussard, Louisiana, just 12km from Perks’ family home in Lafayette.

For Perks, who in 2002 became the only New Zealander to win the Players Championship, the unofficial fifth major, Nobilo’s impact behind the microphone has been an example worth following.

Just as he was on the playing circuit, Nobilo works studiously ahead of tournaments, carefully studying course layouts as well as player trends and technical changes plus any relevant minutiae that may prove useful for viewers at an appropriate time.

Sports Illustrated has described Nobilo as “smart, respectful and respected,” and he “keeps current with the players on the PGA Tour”.

Perks, for one, could not help but be impressed with his compatriot’s work.

“He’s excellent. He’s one of their lead guys when it comes to tournament coverage and he’s also back in the studio in Orlando,” Perks told the Golf Grinder after responding to an email inquiry by phoning the startled writer direct which, it has to be said, is a rare occurrence.

“He’s very well regarded here in the States, he’s well thought of in the confines of the Golf Channel. He’s a very articulate guy, he does a lot of research and a lot of his information is based on fact. It’s always entertaining and informative listening to Frank.”

Perks has definite views on golf broadcasting and, more specifically, what makes a good broadcaster. So, in the interests of never interrupting a conversation, this is what he has to say.

“You have to be prepared. I try to approach it the same way as when I played. I try to tick off all the boxes re preparation, then go out there and react to all the work that I have done.

“I have taken the same philosophy to broadcasting. Some of these guys show up on Wednesday night, walk into their tower and splurt out some stuff from what they see.

“I try to talk to all the players, to get some insight that I can potentially use on the air. I have a producer who wants us to talk less; the rhetoric between the player and the caddie is foremost to what the viewer wants to hear.

“One thing he has drilled into me is the fact we are not going to be able to bring a viewer into the broadcast but we can certainly send them away.

“My goal is to tell the viewer how and why and inform them of something they may not see as a casual viewer. In the back of my mind I am cognisant of the fact this is a hard game and if some guy is in the middle of a fairway with a six iron and he misses the green that it is not always a horrendous shot.

“It is not always a case of a guy choking his guts out or whatever, you have to take into consideration all the factors. You know, if they are coming down the stretch with all the pressure …

“I try to bring that insight to the broadcast. I want to know if the guys have changed equipment or coaches, or are going through changes off the course which may affect their focus.

“You do have to be clear and precise and to say something that is meaningful to the situation. But you do have to say it in a short amount of time because you are always going somewhere else.

“Infrequently do you have an opportunity to sit there and rant and rave about something because you never have more than 10 or 15 seconds prior to or after a shot, because you are always going somewhere else.

“More than anything what people do not understand is that you have your producer in one ear and your director in another and you are trying to find stats, to find trends of what the players have gone through that day or that week, or some other stats pertaining to the situation … more than ever, the bottom line is that you just have to be prepared.”

Perks, who quit the playing circuit in 2007 when his game went awol after 202 PGA Tour appearances, believes his time inside the ropes has served him well for the broadcasting booth.

“I think I have some sort of creditability because I have been there and done that and I have certainly got through to the top, for something of a fleeting moment, before sliding down that slippery slope rather quickly.”

An acquaintance has suggested he venture our way at the end of the year when his broadcasting skills could be put to good use for the BMW New Zealand Open at Clearwater in Christchurch on December 1-4.

He likes the thought of that but has no idea how to facilitate it, so it is to be hoped someone with influence is reading these words and has the intelligence required to act on them.

In the meantime, Perks will keep on keeping on after deciding go put away his pen used to scribble down notes when he ventured into foreign territory as a monthly columnist for a New Zealand publication. He gave that gig away reluctantly and only because he found he did not have time at the end of a busy working day to do the column justice.

“I was proud of what I sent over there. It probably took two weeks’ effort into what I put over there every month.”

It is the same all or nothing approach he takes to his Golf Channel work.

“It’s been a great experience to still be around a game I love and am still passionate about. It’s nice to be at an event with guys who I know but not having to grind over making a cut or trying to do those other things to try and make a living.