Stuart Appleby may have created an Australian first but the player who so brilliantly captured the Greenbrier Classic does not want to be remembered as a ‘Mr 59′.

The 39-year-old Victorian became the only non-American to shoot the magical mark on the US PGA Tour last month.

Appleby was also the first Australian to shoot a 59 on any of golf’s major tours. 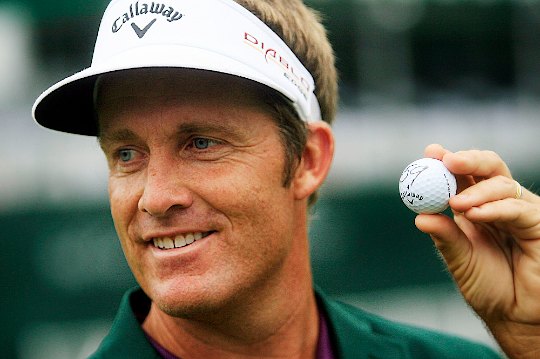 His stunning white-hot showing on the White Sulphur Springs course in West Virginia came less than a month after Paul Goydos recorded a similar feat in the John Deere Classic in Illinois.

Appleby’s record-setting round included a 12th hole eagle and nine birdies in coming from seven shots behind at the start of the final round to win by one from hapless American Jeff Overton, who was still looking for a first Tour victory.

But Appleby does not want to live out his golf career being remembered for what he accomplished on that afternoon of August 1, 2010.

“It was great to do that to win a tournament,” said Appleby.

“To do that and cap off a low number was very unique. So a flood of emotions certainly came across me minutes later.

“But while it’s nice that I will be associated as having shot a 59, I don’t want to be remembered for shooting a 59, and not in the way Al Geiberger and for that matter, Chip Beck are remembered.

“I still have goals of winning a Major. I went close at Muirfield in 2002 and that remains the big goal. Not shooting 59.

“The 59 was obviously part of winning for me. That was the story. But you’re just trying to win and even after signing my card, the tournament wasn’t finished. So the 59 is behind me now and it doesn’t happen very often, and I’ll just be getting back to shooting more normal scores that you might see, and hopefully some good ones,” he said.

“But what I’d like to really take from all of this is what I did well at Greenbrier and how I thought and what I felt and the things I did there, because I know that’s really what created an opportunity for me on Sunday.

“I also know that this win will give me an opportunity when a tournament develops every week ahead of getting into the weekend.

“Those are the things I need to be thinking of and not living on the memory of being a player to shoot a 59.”

And helping Appleby to a slice of golfing history was admiring a tribute within the stunning Greenbrier Resort to legendary Sam Snead.

Snead put Greenbrier on the golfing map and if he wasn’t competing, he would always be found honing his game on the West Virginia gem.

“When we at Greenbrier I noticed there was reference to Sam Snead shooting a 59 with the ball that he used and also the driver he played that were both mounted in a special display,” said Appleby.

“And I am standing there admiring this exhibition even though it was on another course at Greenbrier that was a bit shorter than the one I played on.

“I am thinking to myself ‘how did he do that?’ with greens and the overall agronomy not near as good as it is today. All these variables must have suggested he was not supposed to do that and he still shoots a 59.

“There was very little wind, as the case with my round, and that plays a huge role. I would really love to know what the conditions were like for those other players who shot 59s. We saw with Paul Goydos and his 59 at the John Deere that there was no wind and the greens were very receptive.”

Appleby is no stranger to winning, having won eight US Tour titles before winning at Greenbrier.

Yet it had been more than four years since Appleby had tasted success – that was when he captured the 2006 Shell Houston Open.

Last year Appleby endured a sour downturn in his game eventually losing his Tour card for a first time since breaking onto the US Tour in 1996.

Appleby made just 16 of 25 cuts with only one top-10 finish that saw him finish well down in 137th place and outside the top-55 on the US money list for the first time since that debut season.

He also didn’t play the US Masters for a first time since 1997 and an impressive World Golf Championship record.

For 2010, Appleby accepted a one-time top-25 US Tour career money list exemption but after capturing his ninth US Tour title, he’s now fully exempt to the end of 2012 while he also qualified for next year’s US Masters.

It’s little wonder that Appleby didn’t break out in a wild celebration when holing his birdie putt on the final Greenbrier green.

Appleby did raise a clenched fist knowing in his heart he had finally emerged from four years in the golfing wilderness.

“In comparing my Greenbrier win with my other victories I would say this one was most needed,” he said.

“Most needed in that I was coming out of a drought and coming after most testing times, so it rates very highly compared to my other victories.

“It was a big weight off my shoulders and to shoot a low score on a Sunday and to win was something I had never done in my career and also coming from that far behind to win also was special.

“I’ve had 12 seconds in my career but now I have nine wins.”