Callaway Golf staff professional Arnold Palmer added to his legendary list of golf achievements on Tuesday, November 8th, when he notched his 20th hole-in-one while playing an afternoon round on his home course in Orlando, Florida.

This most recent ace came on hole No. 7 of the Charger Course at the Palmer-owned Bay Hill Club & Lodge. 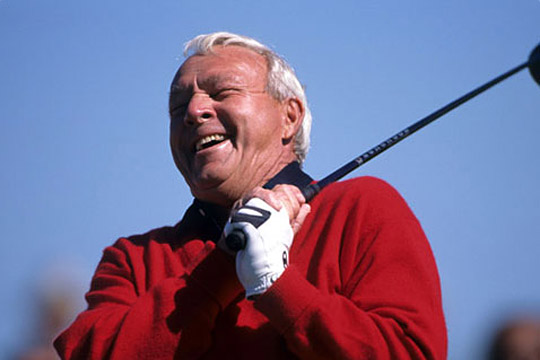 Palmer, who has been on staff with Callaway since 2000, was playing his first round with a brand new set of Callaway’s recently released RAZR XF irons and using the Callaway Tour i(z) golf ball.

The 82-year-old accomplished the feat with a RAZR XF 5-iron from 163 yards.

“It was into a cross-wind from the left. The ball landed 10 feet short and politely rolled up into the hole,” Palmer explained.

“I enjoyed the new irons very much. Yesterday was the first time I used them and I made a hole-in-one, so it was quite a surprise. I’m actually going out to hit some more balls today because I’m excited to play with this new equipment.”

The hole-in-one was part of an impressive round of golf for Palmer, who played alongside friends Dick Ferris, Bill Damron, Bruce Walters and Will Carey.

“It cost me quite a lot of money (at the 19th hole) and I didn’t mind one bit,” Palmer quipped.

Of his 20 lifetime aces, Palmer made three in PGA Tour events, four on the Senior (now Champions) Tour, and one in Japan. His last hole-in-one came eight years ago, also at Bay Hill.

“My first one came at Latrobe Country Club when I was in high school on a short par-3,” Palmer recalled. “I think I’ve made three of the 20 on that same hole. In the early days I was hitting wedges on that hole and now I’m hitting 8-irons.”

The ultra-premium RAZR XF irons that Palmer was using arrived at US retailers on October 14th and are Callaway’s most technologically advanced irons.

They feature a black PVD finish and are sold as a combo set that includes six irons and two hybrids. The irons are constructed with a forged 1025 Carbon Steel body that provides soft, responsive feedback at impact.

The face is made of a thin, high-strength 455 Carpenter Steel, which generates faster ball speeds for increased distance.

Perimeter weighting in the clubhead gives the RAZR XF the highest moment of inertia (MOI) of any iron Callaway has ever created for unparalleled accuracy, even on off-center hits.