Ashlee’s rise worth the weight

A decision to have a lap banding procedure last year has landed Tasmanian Ashlee Dewhurst her biggest title yet, the Australian Amateur Championship.

Dewhurst, a talented right-hander from Royal Hobart Club admitted she knew her golf was headed nowhere if she remained overweight. 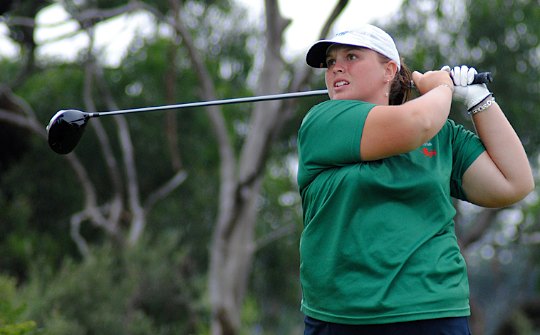 “I figured that I was too big and I wasn’t going to make it anywhere being that big in professional golf,” she said.

“I guess there is Laura Davies but she is an exception to the rule.”

At her worst, Dewhurst weighed in at 114 kilograms but now has shed 15 kilograms and is the lightest she has been in years.

The 22-year-old said due to her increased fitness it helped her last the distance over the exhaustive Australian Amateur competition which consisted of 72 holes stroke play and then a 32 player match play event.

“It has made a lot of difference to my golf.”

“I am not tired after 36 holes or after 18 I can keep going and it makes me practice for longer. It is really good now.”

“I went on diets and they didn’t work so I tried this at the beginning of last year and it seemed to work.”

“I practice up to five or six hours a day and also go to the gym and just eat more healthily.”

For most of the match Dewhurst was the one doing the chasing but as the pair headed up the 36th hole it was the Tasmanian who had the upper hand with a one up lead.

But nerves got the better of her and she three putted the 18th to hand the hole to a stunned Lee.

The pair then traded birdies on the first playoff hole before Dewhurst was able to close it out on the long 353 metre par-four 38th hole with a solid par.

“It is the biggest win for me. I won Riversdale two years ago but this is ten times better,” Dewhurst said.

The victory has meant the Tasmanian is now reviewing her future.

“I was thinking about doing a traineeship but I don’t know if I will still do that or maybe turn pro at the end of this year or next year. This has made me undecided now,” she said.

But one thing is for certain. Dewhurst will continue her weight loss objective.

“I still have a fair bit more to lose so I am really happy with where I am at with it,” she said.

“It will just help my golf get better and better.”