At 86, Arnie is sill keeping himself busy

Golfers the world over can probably relate to this…not making good contact with the ball.

The only difference is, Arnold Palmer is now 86…and still refusing the let the ravages of age keep him from the golf course. 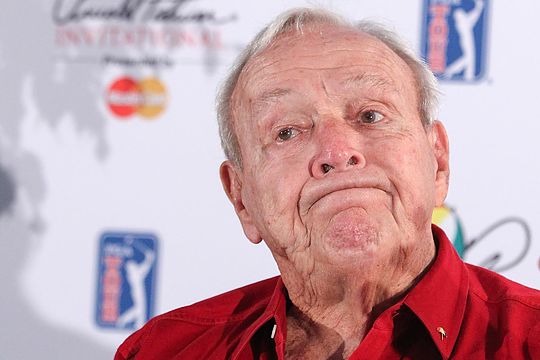 And even though the great man did not appear on the first tee at Augusta National this year to hit that ceremonial first tee shot at The Masters, he certainly hasn’t given the game away.

While mobility, or lack of it, also kept him away from stranding alongside Jack Nicklaus to watch Dustin Johnson win the US Open at Oakmont, he refuses to stop “golfing”.

Just a day after Johnson’s win Palmer was spotted driving his golf cart to the back entrance of his office across from Latrobe Country Club, frustrated after hitting some balls on the range.

“I’m just not making very good contact,” said Palmer. “But I’ll get there.”

One project which does have him hitting the sweet spot is sharing some of his stories in his latest book, ‘A Life Well Played: My Stories’, which has Palmer more excited than ever.

“Though I have written a number of books in the past, this one was particularly important to me because I delved into the process, I realised just how much I still wanted to say to my friends in golf and to fans of the game in general,” Palmer said.

That book is due for release before the end of the year.

And the other thing that occupies Arnie’s time for long periods is signing things for his fans.

Not just half an hour here and there but up to two and three hours a day as members of the famous Arnie’s Army send photos, books, pin flags and other memorabilia for him to sign.

Don’t expect Palmer to appear at Royal Troon for next month’s British Open, where he won by six shots in the 1962 Open…but then again, you never know.

“I might be there. I’m thinking about playing,” he said with that trademark grin.