They have been among the “mainstays” of Australian golf for the past decade or so.

Yet former Australian Open champions Stuart Appleby, Aaron Baddeley and Greg Chalmers face a battle to keep their cards on the multi-million dollar US PGA Tour next year. 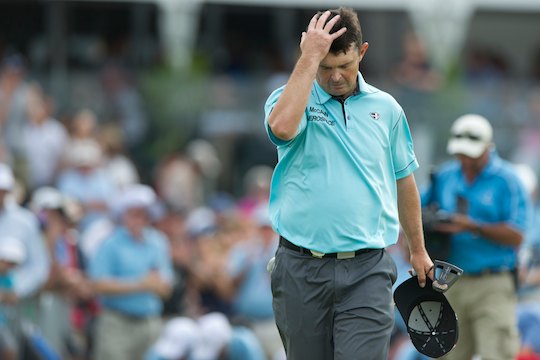 Greg Chalmers is one of several Aussies who are struggling to maintain a PGA Tour card for 2014 (Credit: Anthony Powter)

Despite being a nine-time winner in the US, Appleby is one of several who will have to pull out all stops to finish in the top 125 on the tour’s money list to be assured of a full playing card in 2014.

And despite scoring three wins in the US, Baddeley faces a similar battle with only a month to make his mark.

‘Badds’, who won the Northern Trust Open in Los Angeles just over two years ago was delicately placed at 119th on the money list going into last weekend’s events.

And Appleby, now considered something of a veteran at just 42, actually faces the prospect of being off the tour for the first time since 1996.

It’s a tough call for a player who has won more than $US27m since he began plying his trade in the US.

Should he not creep into the top 125, Appleby faces the prospect of being forced into the secondary play-offs with Web.com tour players, the replacement system for the qualifying school, in a battle for limited cards.

Fail there and he will be left to rely on his past champion status, a bracket that allows just minimal opportunities to play.

Greg Chalmers, who 19 months ago was the toast of Australia having claimed the Australian Open and Australian PGA, is in a similar predicament as he sits 124th on the money list.

“To be honest, it is impossible not to be thinking about it,” said Chalmers, who has missed six of his past eight cuts.

“You get a text every Sunday night updating you of your position and where you stand.”

“There is a lot of pressure. If you are looking for a low pressure job, you shouldn’t take up golf.”

Among those who are secure for next season are US Masters hero Adam Scott as well as Jason Day, Geoff Ogilvy, Marc Leishman, Matt Jones and John Senden while Steven Bowditch (114th) would be unlucky to miss out.

Robert Allenby also has a career money list exemption he can use to play again next year.