Some might suggest he’s shooting for the stars, yet two-time Australian Open winner Aaron Baddeley has never given up hope.

And his goal this season is to try and make it into the Presidents Cup team to take on the Americans at Royal Melbourne at the end of the year. 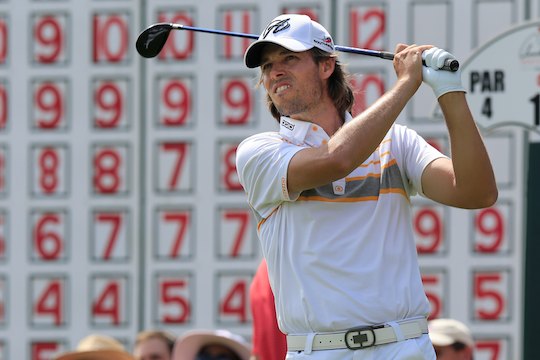 You cannot write the former Victorian off either.

Baddeley has already proven himself one of the true stayers on the US PGA Tour.

After all he’s been competing there for near enough to 20 years and feels he still has something to offer; plenty to work on and good reason to succeed.

Not the least of those is his five children and devoted wife Richelle, who ‘Badds’ describes as ‘incredible’ and one who keeps everyone in line and everything in order and takes care of everybody.

Baddeley admits he probably doesn’t practise as hard as he used to.

But despite a couple of seasons in limbo, he has always had the reputation of being one of the best putters plying their trade on the US Tour.

And you can never suggest he has failed…he has won more than $US21m in his two decades on the tour, which includes four wins on the main tour.

And he’s now happily holing them from everywhere with his old Odyssey No 7 putter.

And that is enough to have him back near the top of the tree in the putting stats.

“I wanted to make sure that I had the flexibility with the putter to use what I wanted,” he says.

“That’s why I didn’t sign any deals. I’m still using Ping equipment and a Vokey wedge; I just changed the putter.”

“I mean, I feel like with equipment companies, unless they’re paying you life-changing money, it’s just not worth it.”

While we might not see Baddeley return to Royal Melbourne in December, he’s shown more than once in the past that you can never write off a champion.