Breakthrough year almost at an end for Gibson

Despite a last hole double bogey leaving an unsavoury taste in the mouth in the final round of the Australian PGA Championship at RACV Royal Pines on Sunday, 29-year old Rhein Gibson will look back on 2015 as the most productive and career-defining year of his life.

Following this week’s NSW PGA where he again sits near the top of the leaderboard after an opening round of 6-under, he will also enjoy the chance to put the feet up for a week or two back in Oklahoma, the PGA being his 34th four-round tournament of the year. 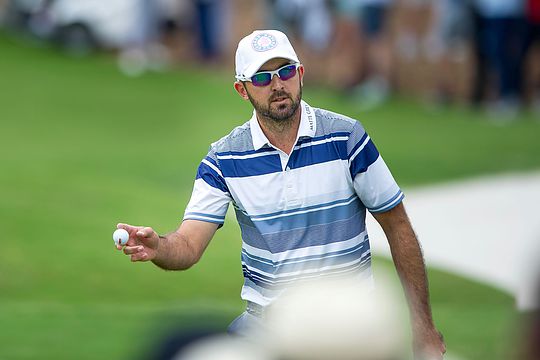 Rhein Gibson thanks the crowd at the recent Australian Open (Credit: Anthony Powter)

Gibson went out for his final round at Royal Pines last week an unlikely chance of victory, despite the course record setting round of eight-under 64 he shot on Friday. He’d sandwiched that 64 between two rounds of 79 and sat a full nine strokes adrift of tournament leader Harold Varner III.

Gibson has seen a lot of Varner III on the Web.Com Tour in the United States, where Gibson played his first full season this year. Courtesy of some fine play in the Tour Finals a few months ago, he’ll be seeing a lot more of Varner III on the PGA TOUR, with both players having earned their places on the biggest stage the game has to offer for the 2015/16 wraparound season.

Prior to earning his stripes on the PGA TOUR, Gibson had played just one PGA TOUR event, the 2014 Open Championship at Royal Liverpool. He earned that start with a hot finish at the 2013 Australian Open, which doubles as an Open Championship Qualifying Series event.

Gibson played all four rounds at Hoylake and for good measure, got to compare his game against no less than Tiger Woods and Jordan Spieth who he was paired with over the weekend of the championship.

Prior to dashing home to Sydney for the Australian Open, Gibson made his first five starts as a Tour member. The first four didn’t go as he would have planned but his first made cut and FedEx Cup points occurred at the last of them – The RSM Classic in Georgia – and his performance left him with a sense of belonging despite finishing tied 58th.

It hasn’t always been that way for the lanky Lismore native who now makes his home in his wife Nancy’s home state of Oklahoma. 2015 was his first full season with a card to play somewhere. Prior to this, it had been a nomadic existence on mini tours and back home in Australia. Anywhere to get a start, to catch a break.

Now the PGA TOUR awaits and 2016 dawns as the most important year of his career and perhaps life.

Australian fans are now starting to see there is more substance to our latest PGA TOUR member than the world record 55 he shot a few years ago with mates in Oklahoma – a number that Gibson commemorates in his Twitter handle.

A tie for 8th at the Australian Open and the form he’s showed on the Gold Coast are helping introduce Australian fans to Gibson’s considerable talents.

Matt Jones was able to elevate his stature at home and demonstrated his fighting spirit with a nail biting victory over Jordan Spieth at The Australian. Perhaps it won’t be long before Rhein Gibson emulates his fellow New South Welshman with some fighting victories of his own.

If and when he does, there will be no doubting he’ll have earned it.