Brooks Koepka enjoys both sides of the Atlantic

He’s been the name on everyone’s lips anyway…and now on both sides of the Atlantic Ocean, it seems.

American Brooks Koepka’s extraordinary run of form has won him fans all around the world. 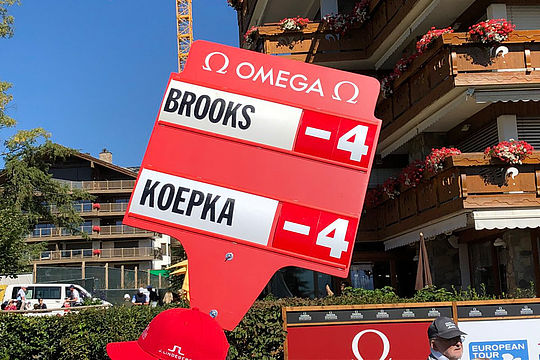 And while he was competing, with some success, in the US last weekend at the BMW Championship it confused many a golf fan when his name also appeared on a scoreboard being carried around for the European Tour’s Omega European Masters.

Not that Brooks’ brother Chase Koepka was to blame – well, maybe partly.

You see Chase was actually playing alongside Daniel Brooks in the third round of the European event.

So when the attendant carrying the board hoisted it high around the course it just happened to have Brooks name on top and Koepka (Chase, that is) underneath it…so the board really did read ‘Brooks Koepka’.

Now we know how popular the three-time major champion is at the moment but even that was pushing it a little too far – to be competing on two different continents at the same time.

And the photograph tells the story…it just seems that everywhere you look there’s Brooks Koepka.