You could never accuse The Great White Shark of lacking the backbone to have a crack at victory when he was at his peak.

Greg Norman never lacked the spine to have a go. 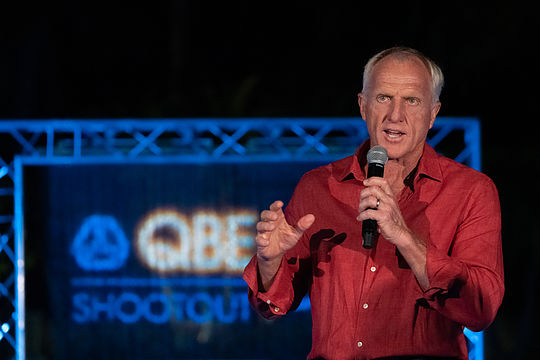 Yet if Norman had his time over again, it is actually ‘the spine’ that would make him do things differently.

Norman has suggested he would play the game with single-length irons if he could do it all again.

The reason? He says it enables you to set up with the same consistent spine angle for every iron shot.

Norman actually took it one step further when he suggested that youngsters just learning about the game and how to play it, should certainly consider having their irons all the same length.

While guesting in the commentary box at the recent QBE Shootout, the Shark went to great pains to explain his experience with irons that were all the same length while experimenting with Cobra King One Length irons.

“Believe it or not, if I had to do it all over again as a 13 or 14-year-old, I would go to one-length clubs,” said Norman while watching video of Bryson DeChambeau swinging with his same length clubs in tournament play.

“I actually had a set made for me when Bryson first came and joined, and I got it straight off the bat.”

“When you think about it, my 4-iron and my 8-iron are the same length, but my ball flight was so good on all of them because your spine angle stays the same.”

“I think parents now, for longevity, golf is a sport you can play your entire life, so if you look at that motion that [DeChambeau is] going through there, it’s such an effortless motion.”

“At the end of the day, the motion is so simple through there.”

“So the one-length golf club, in my humble opinion, give a kid at six, seven, eight…get him used to it and he’ll do well.”