Callaway Golf has announced this week that it has signed four top-ranked amateurs to its professional staff: Lee McCoy, Thomas Detry, Matt NeSmith and Will Starke.

All 4 of these players have recently turned professional after standout collegiate careers. 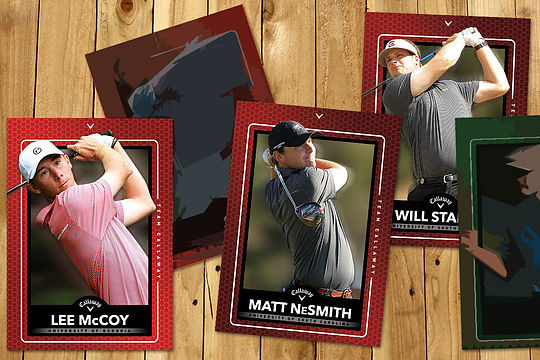 McCoy was named a 1st Team All-American for 2016, he was a 3-time All-American selection at the University of Georgia, and he’s been one of the most highly regarded amateurs in the world this year. He was also selected SEC Player of the Year, won the 2016 SEC Championship, and was 3rd in the amateur rankings before turning professional.

McCoy made headlines in March when he finished T4 at the Valspar Championship, the best finish on the PGA Tour by an amateur in nearly two decades. He competed in the 2015 U.S. Open, played on the 2015 U.S. Walker Team, and won 7 college tournaments during his amateur career.

Detry was the 7th ranked amateur in the world before turning pro after a tremendous NCAA career at the University of Illinois, which he capped off by winning the 2016 Big Ten Championship.

In 2015, he was named the Big Ten Golfer of the Year and was voted an All-American. He also competed for Team Europe in the 2014 Palmer Cup. A native of Belgium, Thomas has represented his country at the World Team Amateur Championship as well.

After earning All-American honours and winning the SEC Championship last year as a junior at the University of South Carolina, NeSmith won two events and was named 1st Team All-SEC and 1st Team All-American in 2016. Matt was ranked 8th in the most recent men’s amateur world rankings, and prior to his outstanding college career he was named the 2012 AJGA Rolex Player of the Year.

An All-American at the University of South Carolina, Starke got his professional career off to a great start by winning the Mackenzie Tour Q-School in April, earning full status on the Canadian Tour in 2016. All 4 staffers will play Callaway equipment and an Odyssey Putter.

Callaway staff pros continue to win on Tours around the world in 2016, including at Augusta, on the European Tour, LPGA, and Web.com. Willett, Ko and Bryan are all currently #1 on the money list on their respective Tours.