The time of their lives…that was the best way for Queensland amateur golfers Jed Morgan and Louis Dobbelaar to describe their week with Australian PGA Tour star Cameron Smith.

As a part of Golf Australia’s ‘Give Back’ program, 25-year-old Smith has followed in fellow Queenslander Karrie Webb’s footsteps with the Cameron Smith Scholarship.

Dobbelaar was the lucky recipient of the scholarship for the first two years, but it was Morgan, from Hatton Vale, who received the $12,500 grant this year.

Still the ultimate reward came earlier this month, when Morgan and Dobbelaar were invited to stay at Smith’s Florida residence and join the PGA Tour winner at TPC Sawgrass for a week of practice, play and learning. 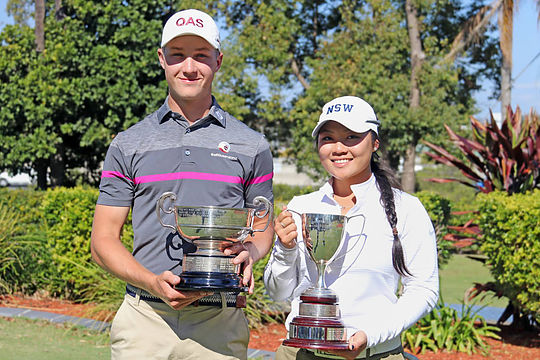 Now both Morgan and Dobbelaar get the chance to put those lessons to the test next month, as they tee it up in the Isuzu Queensland Open later this week.

“It’s been a fun week bit of practise and kind of hung out and gave them a bit of an insight into what it would be like on the PGA Tour,” said Smith.

“When I first came here [to the US] and was trying out I didn’t really have any mates so I wanted to give them an opportunity to find out what it would be like and to know someone they can text whenever they want.”

“Actually it’s been good having them here, we’ve played a few games too and it’s also been a good preparation for myself.”

Morgan agreed suggesting he would take a lot away from the week and hopefully his golf will improve much faster than before.

According to Dobbelaar: “It’s such a great insight into what’s out there and for Cam to let us stay with him and practise in such awesome facilities has been an incredible experience and we’ve enjoyed every bit of it.”

“We can’t thank Cam enough for this.”