Sure, there was a hurricane lurking near them most of the time they were there.

Yet two young Queenslanders had an experience they will never forget when ace Aussie touring pro Cameron Smith hosted Elvis Smylie and Tyler Duncan at his Florida home for a one-in-a-lifetime experience. 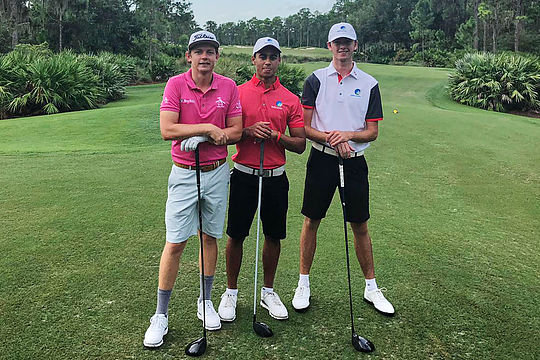 Golf Australia high performance general manager Brad James explained that Smith gave the two aspiring golfers, both Cameron Smith Scholarship winners, the opportunity to see how he prepared and trained for Tour events while they also met some of the stars of the PGA Tour as well.

“Everyone around Australian golf is just as thrilled that Cam is so unbelievably generous with his time and money to turn these what would otherwise be pipedreams into a great learning reality,” said James.

“It’s this sort of stuff, not unlike what Karrie Webb does with our young women, that will keep Australian golf strong into the next generation.”

Duncan said it was an experience he will never forget.

“We started off by fleeing Hurricane Dorian to Tampa where we practised and played at The Concession Golf Club, which was extremely demanding and challenging,” he said.

“After arriving back into Jacksonville a day later with the majority of the courses still closed, we explored the city’s areas as well as the food that there was on offer.

“Finally after a couple days of constant rain and winds, we were able to step on to the renowned TPC Sawgrass…which is just a WOW!”

“The practice facilities themselves are immaculate, leaving myself and Elvis amazed.”

“Playing the course on the other hand is an entirely different experience.”

“The first three holes was spent just trying to realise that we were actually playing Sawgrass. As the round progressed, the more fun the course became.”

“The next two days of playing and practising there were just surreal and the experience was like no other.”