It was just a decade ago that Queensland’s Cameron Smith was dreaming of winning his third consecutive Greg Norman Junior Masters.

He did just that. Battling weather delays to card rounds of 65,69,64 and 66 and secure the trophy alongside Minjee Lee, who is now an LPGA superstar and fellow Greg Norman Medal winner herself. 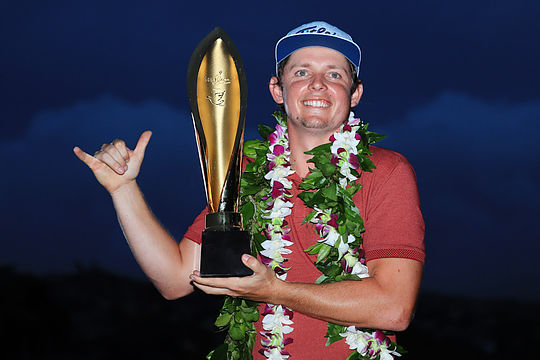 Fast-forward a decade and Cameron Smith can tick another item off the bucket list after being named the 2020 Greg Norman Medal winner last night.

“It’s [Greg Norman Medal] something that has been on the goal list for a few years now,” said Smith.

“To tick that one off is really nice and I was saying to Bud and Ian [Smith’s management team], it would be nice to get another four or five before I’m all said and done.”

In a year that the world was bought to its knees by the COVID-19 pandemic, Smith was able to secure his first individual PGA Tour title at the Sony Open followed later in the year by a superb runner-up finish at the US Masters behind World No.1 Dustin Johnson.

The 27-year-old became the first player in Masters history to fire all four rounds under 70.

It’s an impressive feat given all the issues the PGA Tour players were forced to deal with across the season, not the least of which was access to their support teams including a swing coach.

Many international players including Smith relied on staff back home, who would generally fly in to the US when needed. With overseas flights off the cards, Smith and his long-time coach Grant Field turned to video and phone calls to keep Smith’s game on track.

“On one side it’s really annoying but we know that we’ve got a good thing going and we don’t need to reinvent the wheel to get my swing back to where it needs to be sometimes.”

“We generally try and keep everything as simple as possible. He does a good job of dumbing it down for me sometimes.”

“We just love each other. When we’re spending time together it’s a bit of a bromance. We love each other’s company, we love hanging out together and we’ve basically got the same interests in life.”

“There’s a lot of stuff in my swing today that we’ve been talking about for 15 years. Which is crazy when you think about it because your body changes so much; everything changes so much,” said Smith, who was just 10-years-old when his father, Des, teamed the youngster up with Field.

With two PGA Tour and Australian PGA titles alongside US$13.5 million in career prize money what does Smith think about his Dad’s choice of coach all those year ago?

“He’s just a good bloke and he knows what he’s talking about, so that’s all the areas ticked. It was obviously a good decision in the end.”