A three-time PGA Tour winner, Villegas will be TaylorMade’s leading brand ambassador for the Burner product line and as such, play Burner equipment including the Burner SuperFast 2.0 TP driver and appear in Burner print and television advertising that will begin airing in March. 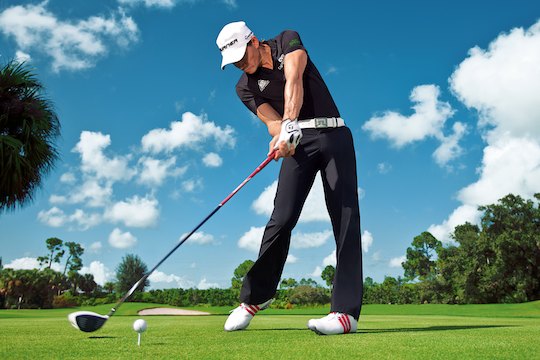 TaylorMade’s latest brand campaign, which touts the “Burner Brotherhood of Speed,” via fast-action cuts of the muscular Villegas recruiting golfers around the globe to join the Burner Brotherhood for its unparalleled speed, distance and performance benefits.

“I am thrilled to join the TaylorMade-adidas Golf Tour Staff and look forward to representing a very unique and exciting Burner brand,” Villegas said.

“The brand’s core values — speed, power and distance — are a perfect match for my personality and most importantly, I believe in the products. I can’t wait to play the new equipment on Tour in 2011.”

The 28-year-old Colombian is coming off another successful PGA Tour campaign that included his third career victory, at the Honda Classic. Villegas also qualified for The Tour Championship after finishing 20th in the FedExCup standings.

For the season, he earned more than $3 million and finished 16th on the money list.

Villegas’ charisma and aggressive style of play made him an instant sensation when he joined the PGA Tour in 2006. He is well known to golf fans for his efficient swing and seemingly effortless power, as well as the signature “Spiderman crouch” he assumes when reading putts, which prompted fans from his home town to nickname him “Hombre Arana.”

His popularity has also attracted plenty of attention off the golf course, where he has been featured in GQ Magazine and named one of People Magazine’s “hottest bachelors” in 2006.

“We sought Camilo as our first and only choice to become the new face of our legendary Burner product line,” said Bob Maggiore, vice president of global brand and product marketing.

“We wanted a player whose lifestyle aligned with our fast, furious Burner product messaging and possessed the charisma to capture a global audience.

Camilo brings both of those qualities to TaylorMade and his passion and enthusiasm for the brand is arresting.”

Villegas is one of the latest players to switch into the Penta TP golf ball, the first and only five-layer Tour ball, which was used in 18 worldwide victories last year including the 2010 PGA Championship. Born January 7, 1982, Villegas will play a No. 7 Penta TP to honor his birthday.

“Camilo is one of the most exciting and recognizable young players in the world, and his aggressive and athletic style make him a natural fit for TaylorMade-adidas Golf and the Burner brand,” said Chuck Presto, senior vice president of global sports marketing.

“He has proven year-in and year-out that he’s capable of competing and winning at the game’s highest level, and we couldn’t imagine adding a better ambassador to our Tour Staff.”

Villegas will debut his new TaylorMade equipment during the 2011 PGA Tour season opener, the Hyundai Tournament of Champions, this week in Maui, Hawaii.