Carly Beck: Moving On Up

I joined Jack Newton Junior Golf (formally known as ‘The Foundation’) in 2006. Why? Because everybody else seemed to be a member.

I first started golf at a cadet clinic in 2002 when I was a 10-year-old at Manly Golf Club, where my first golf coach was the current CEO of Jack Newton Junior Golf, Peter van Wegen. 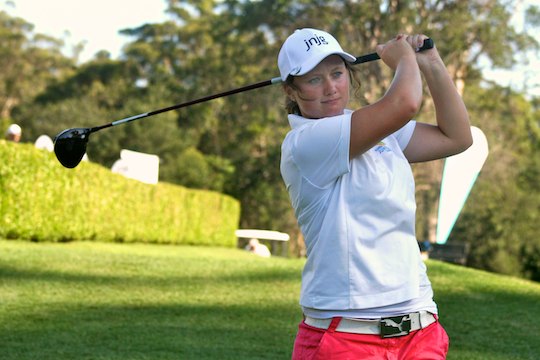 Carly Beck: Moving On Up

I started the 10-week clinic with my first-ever clubs, a five-iron and seven-wood, until I decided to start taking on the tournaments – as a 13-year-old.

The first tournament I played in was the five-day Harvey Norman Week of Golf in the Blue Mountains.

I was raring to go on that first day, I thought I was playing pretty fantastic, when the fog decided to come and kept us out on the course for a good six and a half hours before it was called off with two holes to play.

I played many events in that first year and was lucky enough to be named ‘Rookie of the Year’ at the annual awards presentation.

I continued to play most JNJG events over the next five years and this culminated in the Junior Girl of the Year award in 2010.

Being in this team gave me an opportunity to play with and compete against other elite juniors.

They were awesome weeks away with friends that I will never forget.

These teams were coached and managed by Peter van Wegen and Jan Heys.

In 2010 I was also in the Women’s Open team which was amazing on an entirely different level.

It was much more physically and mentally demanding and it was great to be able to experience how the older players were able to handle this level of competition.

I also represented NSW in the Combined High Schools National Carnival for three years and captained the team in 2010.

One of the great rewards for JNJG players is to represent NSW in the State of Origin team in a head-to-head Ryder Cup-style match with Queensland.

This is played at the Newcastle golf club each year.

Playing 36 holes a day with your mates against the rivals was so much fun and at the end of the day going to Jack and Jackie [Newton]‘s home (Augusta in Cardiff) to have dinner and play tennis was a great experience too.

Over the past two years I have been part the Australian Golf Club Foundation and this has helped improve my game and finally reduce my handicap to scratch at 18 years of age.

With these clubs, I was able to win the 2009 Champion of Champions at Mount Broughton, the 2010 Week of Golf, and the 2010 State Age, where I fired my best round so far of five-under-par.

Being a member of Jack Newton Junior Golf has allowed me to travel across the country, play on some great golf courses and compete against the best young amateurs in Australia.

I am indebted to Jack Newton as he has been a great supporter of my golf and we are lucky to have Jack driving junior golf in New South Wales.

Over the next 12 months I will be playing in all the major women’s events in Australia, working part-time as a sport trainee with JNJG and studying sport management. While my long-term goal is to become a touring professional, I am working to improve my short game and consistency with representing Australian as the major focus.