Paul Casey has confirmed what was widely expected and that is he and his American-born wife, Jocelyn have divorced.

He and Jocelyn Hefner, who is a distant cousin to Playboy founder Hugh Hefner, were married in December 2008 and set-up residence in Scottsdale, Arizona. 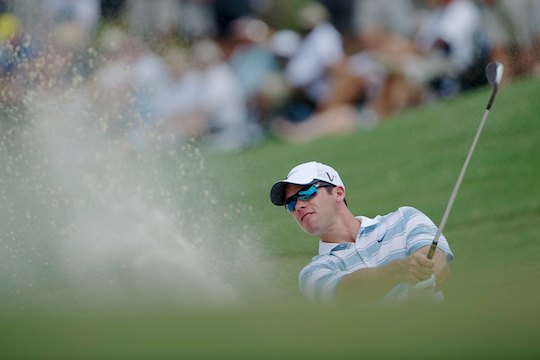 The England golfer, who has won 12 times around the globe including this year’s inaugural Volvo Champions event in Bahrain, indicated to globalgolfpost.com the slump in his marriage coincided with a downturn in his world rankings from a career high of No. 3 in the world in August 2009 to his current position of 20th.

There’s no mention on his website – www.paul-casey.com – of the divorce. However all reference to being married has been removed and in 56 pages of photographs there is not one snap of he and Jocelyn.

The only reference is in a question asked by the Surrey Commet newspaper in January this year.

What is the best holiday destination you’ve been to and why? Italy – my wife and I love going there so anywhere in Italy with my wife.

However while Casey remains well inside the top-50 on the rankings it is his stature on the PGA Tour that has been hit hard by losing his card after finishing the season ranked 144th on the money list.

“Our life on tour was fun at the start but little by little it took its toll,” said Casey.

“My career was costing Jocelyn her dreams.”

“She has a fantastic way with animals. But it was a mutual decision, very sad but for the best.”

“Now she is working as a therapeutic riding instructor and making a great success of it. It’s something she had always wanted to do.”

Casey indicated his heartache was driven home during the recent WGC HSBC Champions event in Shanghai when he heard a couple of dogs barking.

“It made me sad,” he said. “I worked out it was six months since I had seen our dogs.”

Casey has been competing regularly on the PGA Tour since 2008. He broke through for his first and only victory in capturing the 2009 Shell Houston Open.

However the two-year exemption in winning in Texas expired this year meaning Casey will be forced to play on invitations next year.

His world ranking will guarantee him entry into the four Majors and WGCs.

Casey is lying 25th on the Race to Dubai so he is assured of contesting the season-ending Dubai World Championship, and an event where he finished sixth last year.

Casey has earned close to Euro 14.5m in prize money since joining the European Tour in 2001 while his earnings from the PGA Tour amount to $US 10.5m.