What price would you put on holing a few putts? Shall we say $44,401? Sorry, I forgot to add, hole them like Tiger Woods, that is.

You see Woods has used the same Scotty Cameron Newport 2 GSS putter in 13 of his 14 major championship wins. 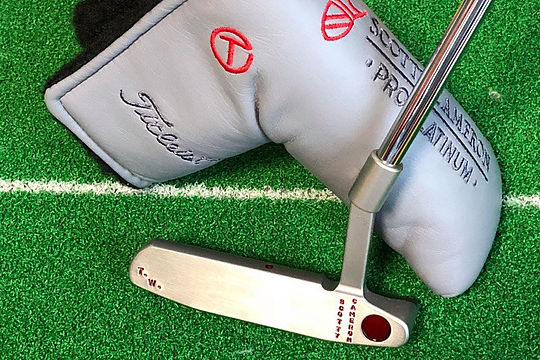 That putter went into Tiger’s bag in 1999 at the Byron Nelson Classic and has logged more rounds and wins than any other putter he’s owned.

But there has to be back-ups.

I mean you never know when something could go wrong and you need to pull a reserve putter off the bench and know that it is going to perform.

Certainly most US Tour players have their favourite putter with a back-up version in case something happens to their No 1 blade.

It has now been revealed that a collector recently shelled out $44,401.20 for the opportunity to own one of the Woods’ back-up putters.

A firm named Green Jacket Auctions has auctioned off the back-up Tiger carried from 2001.

And a comment in the listing suggested Scotty Cameron only produced one or two ‘back-up’ putters for Tiger each year they worked together.

It seems Tiger would try out the back-ups, and even practice with them to ensure they were to his liking.

Yet it has been suggested the 14-time major champion only trusted one for his actual tournament play.

Evidently this isn’t the first time that a Woods back-up has made it out onto the market either.

That probably makes the one sold for $16,000 a bargain…if the new owner ever consents to even take it out for a practice round!

I’m betting it will never hole another putt.