If there’s one thing John Daly was known for other than a spectacularly long golf swing, it was an ability to indulge…both on and off the course.

His free spirit and, at times, perverse approach to the game made him a cult figure for much of the 1990s…and he’d be the first to admit it also contributed to his downfall. 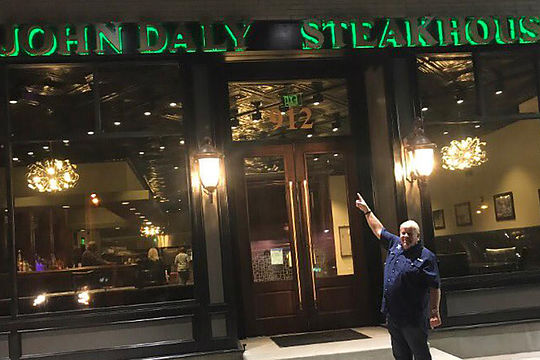 Which is why it is so fitting that after all these years the two-time major winner’s guilty pleasures has manifested into something positive.

His very own steakhouse!

The 51-year-old announced earlier this week that his first restaurant titled The John Daly Steakhouse officially opened in Arkansas, only 50 miles from his Dardanelle residence.

What’s more, it even has a Chandelier made entirely of golf clubs!

“Excited! Big day for us in Conway, Arkansas! The #JohnDalySteakhouse officially opens to the public tomorrow at 11am! #lunch #dinner #brunch,” Daly tweeted.

There is yet to be a follow-up post from Daly him since the restaurant’s grand opening on Wednesday.

But judging by the overwhelmingly positive responses (4.7 out of 5 rating from 73 Facebook reviews), the popular American may have found his new calling!

And don’t be surprised if he picks up his guitar and strums a few bars for patrons now and then either.