Daniel Nisbet: Down But Not Out

Rookie professional Daniel Nisbet is nearing the end of his first year in the paid ranks and it has been a rough and tumble experience for one of our most promising prospects to emerge from the amateur ranks.

Like all aspiring pros, Nisbet kicked off his professional career aiming high. 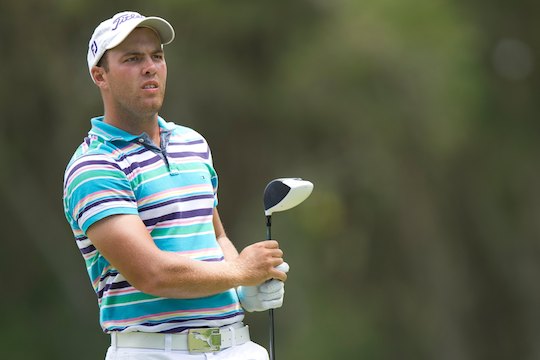 After gaining medallist honours in the first stage of PGA Q School, he hit his first bump after failing to advance beyond the second stage. At the time Nisbet was down, but certainly not out.

Returning from the USA, Nisbet played eight events on the Australasian Tour, initially gaining invitations on the back of his first-class amateur credentials. His second place at the NSW PGA helped get a last minute invitation to the Australian Open where he just missed the cut.

Nisbet’s final event of the Australasian Tour was the New Zealand PGA Championship in March where he once again impressed – tying 8th and picking up a decent cheque to help him on his way back to the USA.

The USA is where Nisbet wants his career to flourish. For the past four months he has been knocking on the door of Web.com events via Monday qualifiers, and playing a few Adams and eGolf Tour events along the way.

“It’s really tough,” says Nisbet. “Trying to qualify for Web.com events via Monday qualifiers is highly competitive. The field can be 150 for just 6 spots. Last week I shot 67 and missed the cut by 2!”

Playing Monday qualifiers is also expensive and tiring and a far cry from the pampering some of our elite amateurs are dished out when playing in the US.

For Nisbet, it has been a grind and a sobering reality check as to what is required to play professional golf.

“I bought a car to save money on air flights and car rentals I save money but it can mean driving for 12 hours before the event.”

“I wanted to understand what it was like to play here week in week out on a budget and have gained a lot of knowledge, experience and contacts.”

Nisbet has had vital support from fellow Caboolture resident Rod Pampling who is based in Dallas, Texas.

Nisbet’s Brisbane-based manager, Ian Davies of Wasserman Media, says, “Rod has been a tremendous help to Dan in every aspect of his move to the US.”

Nisbet’s close friend Ash Ong, herself an accomplished amateur golfer, has spent a few weeks in the States supporting Nisbet.

“It’s been great having Ash over to caddy and help with the demands of the travel and the challenges I have on tour,” says Nisbet.

Nisbet’s immediate plans are to return home to play the Queensland Open in August. The one-hour drive to Brookwater from Caboolture will be a breeze after his US experiences.

With new equipment from TaylorMade, Nisbet remains optimistic about the challenge of gaining status on a US tour.

In October he intends to tee up in the First Stage of Web.com Tour School at Lantana, the course where he streaked the field last year.

“I am confident about First Stage but the competition at Second Stage is much much tougher,” says Nisbet.

“You need to be on form and retain your focus through all the rounds. I just feel I need to give it a go. It’s always been my ambition. If I don’t succeed there will be a plan B.”