They act like any newly-engaged couple – laughing, joking, full of life and looking forward to spending a long time together.

Darren Clarke and Alison Campbell have yet to set a date for their marriage, so for the time being the pair will continue to get to know each other a little better. 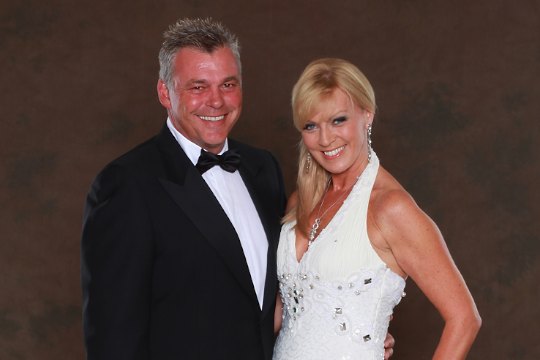 Clarke’s been a leading golfer for more than a decade and is used to competing on the world stage.

It was fellow Ulster golfer and current US Open champion, Graeme McDowell, who can take credit for bringing the pair together.

McDowell used to be friendly with one of Campbell’s models and knowing Campbell had no boyfriend of her own, he suggested Clarke ‘text’ her and ask out for a date.

Before their meeting materialised though, Clarke confessed he was curious about Campbell.

“I was competing in Hong Kong late last year, and had ended 11th in the tournament to just miss out of gaining a place in the Dubai World Championship by one place, finishing 61st on the Race to Dubai,” said Clarke.

“We were all staying at the same hotel in Hong Kong and there was Lee [Westwood], Rory [McIlroy], G. Mac [McDowell] and a few of the caddies sitting there, and they were all getting the late-night flight to Dubai.”

“I was flying back to London having missed out on Dubai but then G. Mac was very friendly with one of Alison’s models back home and they had conspired between the two of them to give me Alison’s phone number with G. Mac saying: ”Now, give this girl a call as she’s really nice, and you two would get on well together”.

“I didn’t know anything about her. I didn’t know who she was, so I sent her a text, and it’s always easier to send a text as you don’t have to talk, and she flew over to London the following Friday.”

“I simply asked her if she would like to come to dinner but before then, and when I got back home from Hong Kong on the Tuesday, I got onto the internet to look for pictures of her to see what she looked like.

“But then I figured that if she was a former Miss Northern Ireland, and a model herself, that she would be a very nice lady, which she is.”

“I liked the look of her straight away and suffice to say the dinner went very well, although she nearly collapsed when she saw me.”

“So everything is good now.

“I’ve settled back into Portrush, I’ve got a new home, the boys are happy, and I’ve got a wonderful fiancée.”

In contrast, Campbell obviously knew all about Darren Clarke, a golfer who’s won two US$1 million first-prize cheques in capturing a pair of World Championship events along with 17 other events around the world.

Asked if he got down on one knee, Clarke laughed: “There’s no way I am letting you have any information about that. But I can say I was the perfect gentleman.”

“She said ‘yes’ but we have not set a date for the wedding.”

“It’s just that our schedules are a bit chaotic, so that’s why we have not locked in a date.”

There would have been some surprised to learn of Clarke’s engagement, especially after the tragedy of losing his first wife, Heather in 2006 to breast cancer.

Equally, there was many surprised Australian golfer Stuart Appleby remarried not too long after the death of his wife, Renay at London’s Waterloo Railway Station, and the day after the 1998 British Open as the couple were set to board Eurostar for a romantic holiday in Paris.

But while Clarke will always cherish fond memories of his marriage to Heather, life moves on and there’s no reason a larger-than-life figure like Clarke should stay single.

So does Campbell know what she’s getting herself into?

A golfer desperate to end a more than two-year winless drought, a person who enjoys the odd pint of Guinness or two, along with the occasional cigar plus a few bets on the races.

“Alison runs one of the most successful modelling agencies in Belfast, she’s travelled the world with the Miss World contest, she’s done all sorts of stuff, so she’s used to dealing with people all the time,” Clarke grinned.

“So she’s well able to handle me. Even my stress! She lets me stew for a while and just ignores me.”