He’s a student of the game…and five-time PGA Tour winner Bryson DeChambeau always does his homework.

And when golf’s new rules are introduced at the end of next month, he plans to take advantage of that and leave the flagstick in when he putts…even when he’s on the green. 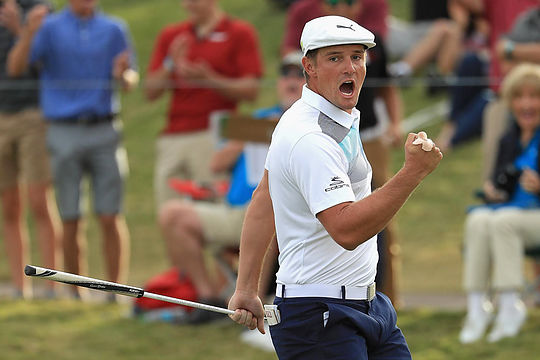 It has been quite well-publicised that from January 1, 2019 the Rules of Golf state that you can leave the flagstick in all the time, if you wish.

DeChambeau was queried about what he would do while doing a recent photo shoot in the US.

Like everything he does, DeChambeau’s answer was well thought-out.

“It depends on the COR, the coefficient of restitution of the flagstick,” he said.

“In US Opens, I’ll take it out, and every other Tour event, when it’s fibreglass, I’ll leave it in and bounce that ball against the flagstick if I need to.”

DeChambeau pointed out that US Open pins were often notably thicker than typical Tour pins, leading to more aggressive rebounding when struck.

“It’s a higher propensity for it to go in the hole if it’s fibreglass, compared to metal,” DeChambeau said.

DeChambeau was also quizzed as to whether or not he would leave the pin in when he putted.

“The USGA’s going to have to go back on that one.”