Does Daly deserve another chance?

As with any sporting event, the fans have the final say – as they are entitled to.

And besides Greg Norman and Tiger Woods, no-one has more pulling power for golf fans in Australia than John Daly. 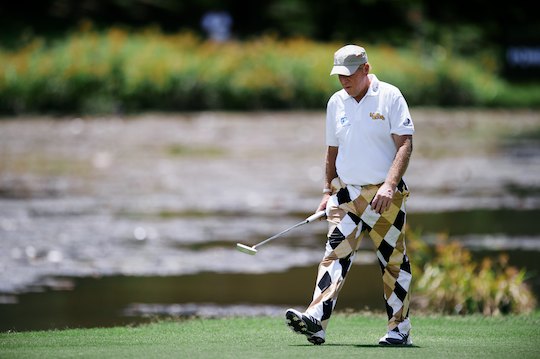 Yes, there will be some ‘old school’ golf fans who won’t want a bar of Daly after his much-publicised walk-off at last year’s Australian Open after incurring a penalty for playing the wrong ball on the 10th hole and subsequently hitting ball after ball into the water on the par-five 11th and giving it away when he had run out of balls, or so he said.

Yet they will line the fairways if Daly comes back this year, as has been rumoured, for another shot at The Lakes and another Australian Open.

When word goes around the course that Daly is approaching the back nine, yes, they will come out of the woodwork to see how he handles what can be one of the toughest stretches in tournament golf, on its day.

Maybe Golf Australia officials can nip this in the bud before it starts!

If they do give him a ticket into the field, what about a plane ticket from the US as well – alongside another visiting hero, the great Tom Watson?

An eight time-major winner, Watson is almost as famous for upholding and respecting the traditions and rules of the game better than anyone.

A few quiet words on the journey over might be all it takes for Australia to see the best of John Daly…and a long-awaited return to form.