Welsh golfing ace will refrain from ever using a chainsaw again after being lucky not to sever his left hand.

Donaldson suffered the injury a week ago cutting down trees on his property but the good news is he will have the stitches removed this week. 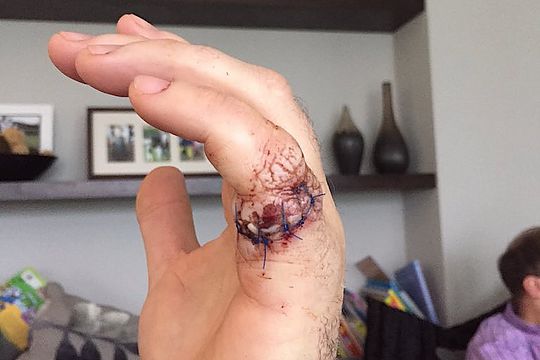 It was first thought the 2014 Ryder Cup winning hero could be out for some weeks but there the news from his manager is that he could very well compete in next fortnight’s Dubai Desert Classic.

On Twitter, Donaldson posted a candid photograph of his injury, and said: “So folks in my time off [I] decided to have a fight with a chainsaw and lost! Oops!! C u in Dubai.”

In addition to missing the Abu Dhabi championship, which he won in 2013, Donaldson will also miss the Singapore Open while he recovers.

Jamie Donaldson will be back in action in approximately a month.

He was ranked among the top 10 golfers in the world in 2015 and was part of the 2014 Ryder Cup team that defeated the United States at Gleneagles, with Donaldson himself winning the decisive winning point.

Donaldson’s chainsaw accident is not dissimilar to that which saw fellow golfer Greg Norman suffer much more serious injuries in 2014.

Norman, a two-time winner of The Open, very nearly lost his left hand to the chainsaw.

He tweeted at the time: “Working with a chainsaw ALWAYS be respectful of the unexpected.”

The 40-year-old Welshman won the Thailand Golf Championship in December and is thus already qualified to enter the Masters and The Open in 2016.