High-profile golf analyst Brandel Chamblee suggests most professionals will be leaving the flag in the hole when they putt on the US Tour – by the end of the season.

While most pros are still ‘experimenting’ and indeed, arguing about the pros and cons of the new rule, it seems Italian pro Edoardo Molinari decided to try some serious tests of his own. 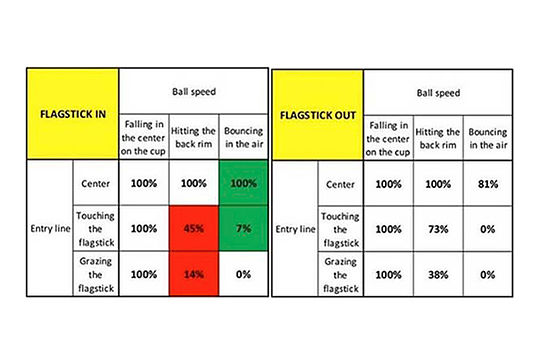 Molinari, the elder brother of British Open champion Francesco, received some mixed results when he enlisted the assistance of three professionals from his golf academy in Italy to try out both methods.

The three used a Perfect Putter, a training aid that ensures you get the same speed and line, in the experiment, which consisted of three different speeds (slow, medium and fast).

According to Molinari, who’s a three-time European Tour winner, the three pros did 100 putts of each combination.

And the results will probably leave you just as confused as you were before the new rule came in on January 1, 2019.

For slow speed putts, it seems there is no difference whether you leave the flagstick in or take it out;

Confused? Well, you’ll just have to make the call whether you’re a ‘high-speed’ putter or a ‘lagger’.

No doubt there will be more tests carried out during the course of the year as previously to the new rule coming into play the only one to conduct any serious flag-in-or-out tests was US putting guru Dave Pelz – and that was way back in 1990.

For the record, Pelz’s tests concluded you should always leave the flagstick in, assuming it’s not slanted in one direction.

He suggested the stick proved a perfect backstop that slowed down a ball and allowed gravity more of a chance to pull it into the hole.