A furious Ernie Els was demanding an apology from Ian Poulter after viewing his negative Wentworth comments during the recent BMW PGA Championship as a personal attack on the triple Major winner.

Els was in charge of the ‘Burma Road’ redesign but was forced into damage control mode after the second round when Poulter slammed changes to the course. 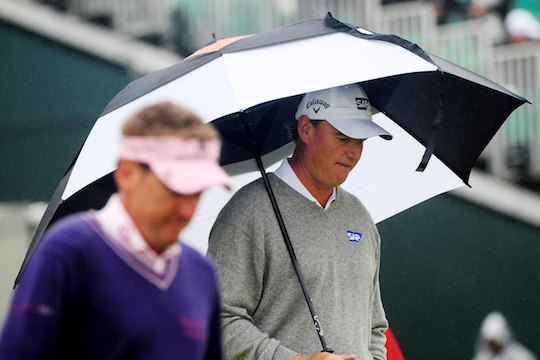 Poulter had just double bogeyed the last before in part saying: “I don’t like this golf course, period. End of story.”

Els birdied his closing two holes in a final-round 70 for a one-over-par tally.

And for a second day running, the South African played alongside former Wentworth winner, Paul Casey who was also critical of Els’ initiated changes.

But it was Poulter who was clearly in Els’ sights.

“It’s difficult not to take it personally and especially if it’s coming out of left field,” said the big South African.

“When a guy double-bogeys the last, and doesn’t hit the right shot, and then blames the golf course for his bad shots. No, I don’t take that lightly.

“We’ll have a word when it is suitable, and when Ian’s calmed down a little bit, and maybe reflects on the week.

“His comments have done a lot of damage to the flagship event.

“So to come out with comments like that is uncalled for, and he should think twice before he does that.

“Maybe he should take 10 minutes after he’s made a double and calm down first.

“I’ve done the same and it’s difficult to keep your composure, and he obviously had lost his composure.

“I said to Paul (Casey), who I’ve played with for the past two days, and I said to him rather than getting on a stage and talking to the world come to me with some constructive criticism and we will listen.

“But I’m not going to take this craziness. It’s uncalled for.”

However Els was thrilled the way the week unfolded with the world’s top two golfers in Lee Westwood and Luke Donald vying for the title.

“It gives me sense of pride to see the top two players up there on the board, and they’re going to turn this week into a huge positive,” said Els.

“Lee and Luke have not got into the mud throwing, and have just applied themselves to playing golf on a very tough golf course.

“So the guys on their games are enjoying their challenge out there.

“And to see the two best players in the world slugging it out at the Tour’s home, and in the flagship event, is something very, very special.”

Els also confirmed his design team would sit down over the ensuing 12 months to look at what other changes or alterations could be made to the course ahead of the 2012 BMW PGA.