In a career that could fill out several Hall Of Fame resumes, Tiger Woods finally has his name enshrined alongside the greats of the game at the new PGA Tour headquarters in Florida.

The 82-time PGA Tour champion had to endure a near-death car crash and two years of COVID delays on his way to being inducted into the World Golf Hall of Fame overnight.

Woods, who was introduced by his 14-year-old daughter, Sam, didn’t need to mention his accomplishments, we all know what he has achieved. Instead, the 46-year-old spoke about his childhood and his struggles growing up in a world where the colour of his skin meant more than what he did on the golf course.

“One of the things that Dad had instilled in me is that he grew up in an era, same era as Charlie Sifford and why my son is named after Charlie, is that you had to be twice as good to be given half a chance.”

“So that understanding and that drive, as Sam said, train hard, fight easy. I made practicing so difficult, hurt so much, because I wanted to make sure that I was ready come game time. I hit thousands of balls, hands bleeding, aching, just so that I could play in a tournament.”

“Playing at some of these golf courses, I was not allowed in the clubhouses where all the other juniors were. The colour of my skin dictated that. As I got older, that drove me even more.” 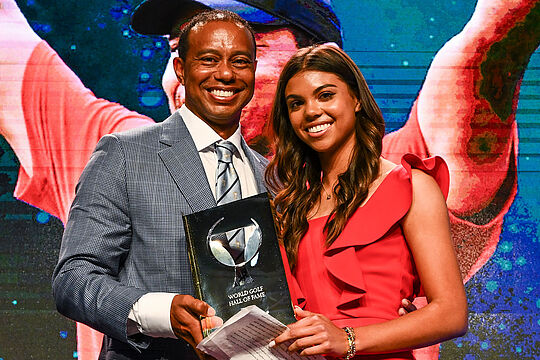 Woods also spoke about his parents having to take out a second mortgage to play the junior circuits where a young Tiger Woods could get the exposure he needed to enter the all-important US collegiate system.

“Throughout my junior golf days, we didn’t have the financial means to play some of the bigger events. As I progressed through the sport, our family made — or was forced to make a decision. As I became of age when I was about 14, 15, I was going to start playing what is called the AJGA, American Junior Golf Association. I was there getting exposed to possible collegiate scholarships. College coaches were there to watch them play,” said Woods.

“That defined my career, which allowed me to get into a great university like Stanford. From there, I turned pro. And Phil Knight is here, CEO of Nike, and at the time Wally Uihlein was the president and CEO of Titleist, very generous signing a little punk kid from Stanford at 20 years old to these exorbitant contracts, first thing I was able to do is I was able to pay off that mortgage.”

And some 25 years later, today’s pros are well aware of what Woods brought to the game of golf.

“His impact on the game is probably the most profound of anybody ever. I mean, especially the pro game,” said FedExCup champion, Patrick Cantlay, who took home close to $30 million for his on-course efforts last year.

“I wouldn’t say I know enough about Palmer or Bobby Jones to say — or Nicklaus to say how they impacted that at the time, but I think every pro out here owes a debt of gratitude to Tiger because this sport wouldn’t be where it is today without his impact.”

Cantlay was speaking ahead of the Players Championship, where the field is competing for a prize pool of $20 million and a first prize of $3.6 million. And what was the entire purse in 1997 on Woods’ debut at the tournament? $3.5 million.

It was only fitting that the person directly responsible for turning Woods’ on-course success into big prizemoney was then-PGA Tour commissioner Tim Finchem, who was also inducted into the World Golf Hall of Fame alongside Woods.

Finchem came to the helm of the PGA Tour in 1994 and rode the Tigermania wave and beyond before retiring in 2017. The 74-year-old presided over several high-profile television deals for the PGA Tour, which allowed the tournament purses to reach previously unthinkable highs, which still continue today.