Greg Norman was the number one golfer in the world for a total of more than six years, won two majors among over 90 professional wins along with a spot in the World Golf Hall of Fame.

Despite all of that success, he will be forever remembered for his final round collapses at the Augusta. Norman finished inside the top-5 on 20 occasions from 91 major starts with eight of those, including three second places, coming at the Masters.

And now we can relive all the highs and lows of Norman’s career thanks to a new documentary from ESPN titled “Shark”.

The 90-minute episode opens with images from his losses at Augusta including in 1996 to Nick Faldo before cutting to Norman himself watching the footage.

We find out soon that the 67-year-old has agreed to return to Augusta and walk the course to relive moments from his career at the Masters, both good and bad. Ian Baker-Finch, Jack Nicklaus, Steve Elkington, Nick Faldo and Brandel Chamblee among others discuss pivotal moments while we watch Norman’s career highlights unfold before our eyes. 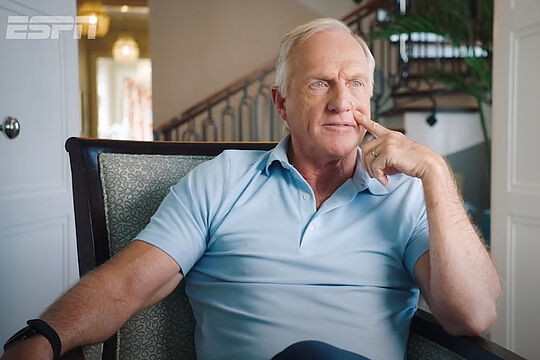 Just like Tiger Woods after him, it’s easy to forget just how big Norman was in his heyday. As well as winning 20 PGA Tour titles, the Queenslander had special something that set him apart from almost everyone else on Tour. His good looks and success were a winning combination that matched perfectly with the exuberance and excess of the 1980′s.

By the time the Shark arrived in the US in 1981, via his win at the 1980 Australian Open, Jack Nicklaus was at the tail end of his career and golf fans were clamouring for something new. A tall, handsome long-hitting blonde from Down Under answered the call.

Norman finished 7th at the Sea Pines Heritage in his second tournament that year and then put himself on the map with an outright 4th place on debut at the Masters. He matched that score again in August 1981 at the PGA Championship.

It would take until 1984 for the Great White Shark to earn his first trophy. A win in June at the Kemper Open and a second place at the US Open after losing to Fuzzy Zoeller in an 18-hole playoff two weeks later cemented his place on the PGA Tour. He went on to claim another win at the Canadian Open and a runner-up at the Western Open in July.

To his credit, Norman is refreshingly upfront about his failures. Rather than hiding behind excuses, at 67 he seems more open to discussing the truth behind the final round breakdowns.

“Putting yourself in the position is what it’s all about, right? You control your own destiny,” says Norman when asked whether he has been unlucky or whether he puts himself in a position to be be unlucky.

Let’s remember that when he lost to Larry Mize’s infamous chip-in birdie at the 1987 Masters, Norman had shot six bogeys that day for a round of 72 and missing the green jacket by a shot.

Part of the “30 For 30″ series, “Shark” made its premiere on Foxtel’s ESPN channel on April 20th but is available to watch now “On Demand” and comes highly recommend.