She may be regarded as our elder stateswoman, but Karrie Webb has issued a warning to her rivals that she isn’t done with yet.

Her near-nerveless winning display at the recent HSBC Women’s Champions in Singapore showed that the 36-year-old still has the passion and desire to win on the world stage. 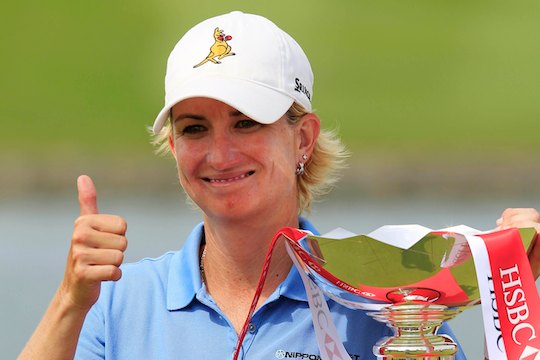 A 15-year veteran of the US LPGA, Webb had been winless on that tour for almost two years and during the 2011 Australian season, managed just two top 10 finishes.

Quite simply, there were many who thought maybe the Queenslander had enjoyed her time in the sun.

But mention that to the lady herself and here’s what you get.

“Tiger Woods is only one year younger than me, and so is he not meant to win anymore either,” Webb told Golfer Pacific in an exclusive interview.

“Lee Westwood was the number one player in the world until a few weeks ago and he has to be close to 40 and he is playing the best golf of his career.

“I am still capable of playing golf like I did 10 years ago, I just have to take the handbrake off and let it happen.”

Of course, Webb, who is arguably this country’s greatest ever, makes some very valid points. Yet she candidly admits that even though she has won 48 titles worldwide, she is still learning about how to ‘let it happen’ out on the course.

“I think my goals from here on out, now that I have the win, are to not raise the expectation level to a notch that drives me silly and I don’t perform well,” she said.

“It is more to just keep this going and my mindset that I have had, keep it going for the year and not push too hard when the big tournaments are on and sort of just let it happen and let’s see.”

Like so many elite athletes, Webb has discovered the key to winning is to not think about it. It’s what she did so successfully at the HSBC Women’s Champions in Singapore when she chased down the three-shot lead held by Japan’s Chie Arimura.

“I wanted to do as good a job as I could and then I went on to win.”

Although Webb would clearly love to notch up 50 worldwide career wins this year, she knows just how hard it will be.

“The standard of golf has gotten so much better. When I first went to the LPGA there was probably 20 players you could watch on the range and say ‘OK, they have legitimate shots and can win’,” she explained.

But make no mistake; Webb won’t be using that as an excuse. There’s still plenty of fire and belief in the belly.

“When people say ‘Did you have fun today, was it fun winning?’ I don’t class that as fun,” the seven-time Major winner said.

“Fun is when you are laughing and not under intense pressure, but I enjoy that feeling and I enjoy that challenge.”

“I think I enjoyed those challenges when I was younger but I didn’t enjoy what came along with it.”

“Now I want to feel all those experiences again so I can really appreciate and enjoy how good I can be at the game.”